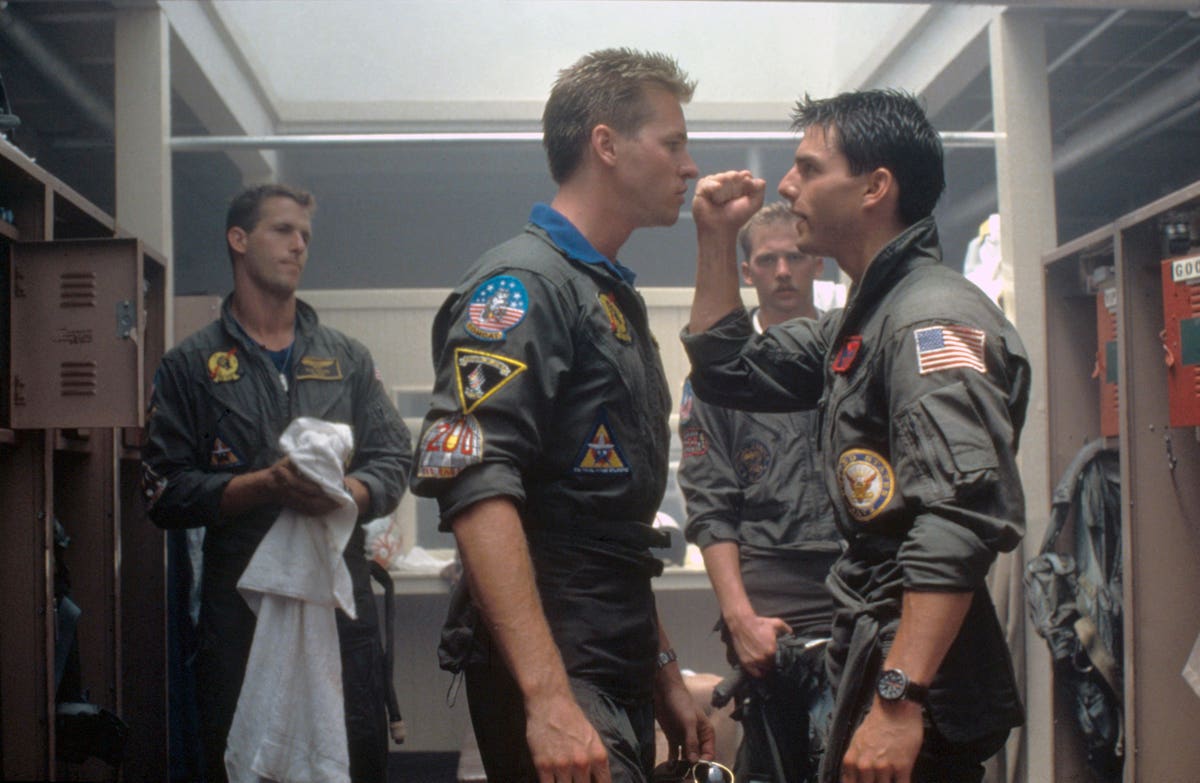 It’s been six months since lockdown and domestic harmony is hanging by a thread because my kids can no longer agree on a movie. Six months ago, the list seemed endless. But after exhausting the Monty Python canon, Airplane, and Fletch, I led them astray with films they found too slow (Rushmore) or obscure (The Coca-Cola Kid) and lost all cinematic credibility. Now Leo and Zev want action movies or comedies while 11-year-old Hal insists on Muppets or anime. So our pandemic film festival is approaching a shabby final gala.

When he’s not reading comics or cracking corny jokes, Hal tends to focus on food. One boring Covid day he passed me a post-it note that read: “Brazil nuts bug me.” Why was he was thinking about Brazil nuts? His response: “Why are you not thinking about Brazil nuts?” Then there was the time we miraculously agreed to watch Top Gun. During the film, the boys batted around fighter pilot call signs: Maverick, Hollywood, Iceman, Viper, Cougar, Wolfman, Slider, and Stinger. As the final credits rolled, Hal stood up and confidently informed his brothers: “If I went to Top Gun, my call sign would be Croissant.”

If Hal somehow made it to Top Gun, he’d be sent home quicker than the tens of millions of workers who, back in March, were exiled from their offices. For six months, over half of American workers have attempted to do their jobs from home – about twice as many as those continuing to work outside the home. Despite the odd skeptic like Netflix’s Reed Hastings (remote work “a pure negative”), most employers think it’s going pretty well. Beyond obvious savings like commute time ($90B in economic benefit per one calculation), and business travel, many employers are reporting more and better work due to longer hours, or perhaps the intentionality required for Zoom meetings is reducing time-wasting gatherings. Considering the potential long-term savings on office space, it’s no wonder high profile companies in tech, but also financial services, media, and retail have announced work from home will continue into 2021 and beyond. In some markets (Silicon Valley, DC), up to half of all jobs could be performed from home. Most economists believe Reed Hastings is in the minority; firms that don’t go completely remote are likely to require only a couple days a week in the office.

In a decade, when we look back at the pandemic of 2020, the biggest change to higher education is likely to be the work from home revolution. Such a radical shift in the behavior of higher education’s ultimate customer – employers – means that if preparing students for work is a priority – still debatable at many institutions, particularly for good first jobs that lead to economic success (vs. bad first jobs that lead to persistent underemployment) – institutions will have no choice but to rethink how they’re preparing students.

First, colleges and universities need to get serious about equipping students with specific digital hard skills, particularly as a tsunami of collaboration platforms for remote work is about to hit entry-level job descriptions. Second, new digital soft skills like tele-empathy (direct communication, verbal cues, active listening, remote conflict resolution) will rear their head. And because graduates need to be prepared to work remotely and autonomously from day one, other soft skills will come to the fore. Without supervisors physically present, they’ll need to have a higher level of organization and take more initiative. Employers are likely to want to see budding entrepreneurs in their remote hires.

It’s hard enough to convince colleges to get serious about incorporating digital skills into academic programs and curricula. New remote work soft skills like tele-empathy add a degree of difficulty to higher education’s employability challenge. In addition, remote work will make it more difficult for career launchers to find mentors and establish professional networks. As a result, students will need help building career-relevant relationships before they hit the workforce: not MBA-level networking, but faster and cheaper alumni networks like PeopleGrove. Other networks that can help address these gaps are the new marketplaces connecting school and work. Riipen allows faculty to incorporate digital projects from employers directly into coursework, and its new virtual internship model is a turnkey co-op program for colleges and universities. By completing real digital work for real employers before they graduate, students can exercise groups of remote work muscles.

All this sounds like a lot of additional work for colleges and universities at a time they can’t afford to do what they did last year. But there’s one silver lining. For decades, students have flocked to colleges and universities in the largest and most dynamic urban areas to be where the jobs are, at the expense of small and mid-size institutions in secondary and tertiary markets and rural areas. Remote work helps level the playing field for schools that didn’t have the foresight or courtesy to begin life in New York, San Francisco, Seattle, or DC.

The work from home revolution will require colleges and universities to make changes in order to continue to serve the students they’re currently serving. But the more dramatic impact is the final decoupling of the digital economy from the analog economy, and on the students they haven’t served well, or at all.

While the recession is effectively over for digital workers, it’s getting worse for everyone else: employees and contractors on the front lines of retail, hospitality, transportation, and services who don’t have the luxury of working from home. Best case scenario for analog workers: continuing to go to work every day, providing essential services while risking their own health. Less-than-best case: furloughed or let go.

When Covid is finally in the rearview mirror, millions of service workers won’t have jobs to go back to. 11.5M jobs have been already lost, many in retail and food service; restaurants have lost 2.5M jobs since February. Employment has fallen fastest, furthest among low-income workers working in high-income areas. As every high income digital professional may support as many as five service jobs, millions of additional job losses are likely as work from home becomes the norm and office workers don’t need lunches made, rides home, or wastebaskets emptied.

The most important question facing American higher education is what can be done for millions of service workers who were barely getting by six months ago – pre-Covid, one in six restaurant workers lived below the poverty line – and now need pathways to digital jobs. Is the answer new multi-year degree programs that cost tens or hundreds of thousands of dollars? Or new degree programs that cost tens or hundreds of thousands of dollars, but are online, so displaced line cooks and servers can take on student loan debt in their pajamas? Colleges and universities have a responsibility to leverage their infrastructure and many privileges (federal and state funding, tax status, prestige, public trust) to help put America back to work. And that means faster + cheaper skills-based certificates, certifications, and pathways without regard to whether they fit into a traditional academic rubric, or whether current faculty have the desire or ability to deliver these programs. (If not, please find new faculty.)

For decades, academia has pledged allegiance to the concept of lifelong learning. The assumption was always that lifelong learning would stack additional credentials, courses, and experiences atop the initial degree bundle. So lifelong learning wasn’t a particularly altruistic concept. It meant that after the core institution sold the degree, the continuing/executive education division would sell more.

It is now clear – at least for millions of displaced service workers – that lifelong learning must be an OR rather than an AND. Faster + cheaper pathways to good first digital jobs are desperately needed if we want to keep the work from home revolution from lengthening and deepening our economic, social, and political crises. Colleges and universities that shrug this off as someone else’s problem are failing to live up to their ideals, their mission, and their civic responsibility.

One final challenge posed by work from home for both students and displaced workers is that the combination of remote hiring and remote onboarding is likely to make employers even pickier as they evaluate candidates for entry-level positions. I’ve written previously about hiring friction: the reduced propensity of employers to hire candidates who don’t check every box in the job description. There are many reasons for hiring friction, but working from home certainly won’t be a lubricant and could turn entry-level jobs into oxymorons at many employers.

So for both students and displaced workers, colleges and universities have no choice but to adopt a more proactive approach to career services. It will no longer be enough to welcome employers on campus or provide students with access to job listings, even curated ones. Higher education institutions will need to address hiring friction head-on via new tools like skills-based digital credentials, networks like PeopleGrove and Riipen, and ultimately by allowing employers to try before they buy. Try before they buy becomes possible through partnerships with emerging employment intermediaries – business services companies or staffing firms – or by establishing their own intermediaries to serve as employers of record for graduates of degree programs, certifications, certificates, and pathways, allowing employers to gain confidence before making the harder decision to hire entry-level remote workers. Try before they buy means more good first jobs for students and displaced workers.

If 2020 demonstrates anything, it’s that no one can predict the future. It’s easy to lampoon the “Future of Work.” For example, the only people who don’t have to worry about the Future of Work are Future of Work experts. Or how can we expect future workers to have the grit they’ll need when they’re replaced by machines if we don’t start replacing them with machines today? But in the past six months, one element of the Future of Work has become fairly clear: rather than working from an office surrounded by colleagues, bosses, and mentors, many new digital workers will start their careers working from home.

Likewise, accurately predicting the future of higher education is a fool’s errand. 20 years ago, technology was going to transform higher education: students across the country and around the world would be taking the same multi-million-dollar simulation courses from the same rock star professors. But despite the current remote learning experiment (prompting self-proclaimed experts and higher education tourists alike to prophesy that the end of traditional higher education is nigh), as demonstrated by this summer’s run on Plexiglas, colleges and universities can’t wait to get back to campus where courses will look quite familiar i.e., don’t count on a tectonic shift to technology-enabled active learning.

Technology isn’t changing higher education directly, but rather in a roundabout way: initially by changing the skillsets employers are seeking in new employees, then by digitizing hiring, and now via the work from home revolution. Colleges and universities that fail to prepare will be as out of place in the 21st century economy as a pilot named Croissant at Top Gun.