When Hurricane Sally hammered Pensacola with heavy rain and winds last month, the storm caused massive flooding at the Waterfront Rescue Mission that forced the shelter to close for repairs — dealing yet another blow to the area’s homeless population.

With bed capacities at shelters already reduced due by COVID-19 restrictions, the temporary closure of the organization has displaced many of those who relied on Pensacola’s largest shelter prior to the storm.

But now, about a dozen homeless men in Waterfront’s work training program are laboring eight hours a day to help repair the place they call home. Waterfront expects to reopen its facility in four to six weeks, thanks to the men’s help. 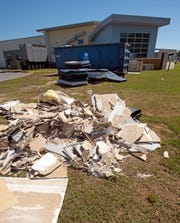 Although far from the shoreline, Waterfront’s campus on West Herman Street is in a section of Pensacola particularly prone to flooding. Shelter staff prepared for Hurricane Sally by evacuating all of the shelter’s residents the night before the storm.

“Between 65 and 85 individuals were transported to the Bay Center (shelter) the night before Sally,” said Jody Shoop, director of Waterfront Mission’s Pensacola campus.

As Sally pummeled the area with rain, poor drainage caused water to collect and build up in the streets surrounding the shelter, Shoop said. Six to 10 inches of floodwater flowed into the first floors of all three of Waterfront’s buildings.

Ever since then, an eight-foot sign with the word “CLOSED” scrawled in black spray paint, has stood at the entrance gate. Waterfront Senior Vice President Angie Ishee said she finds it “gut wrenching” to pull into the office parking lot every morning and have to see that sign. 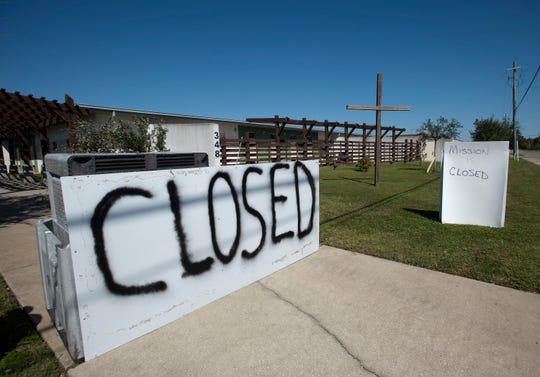 “About 40% of the people living homeless have been identified as having a mental health issue or a drug and alcohol issue,” she said. “So you compound that with the fact that jobs are scarce right now, and now Waterfront doesn’t have overnight shelter, then yes, that does pose great concern for us.”

Even with the shelter closed, staff have worked to distribute food, toiletries and other necessities to Pensacola’s homeless population and have adopted proactive practices such as delivering ready-to-eat meals in the shelter’s vans.

“We are constantly reaching out to people,” Shoop said. “We just don’t sit here and wait for them to come. We reach out to them as well.”

Still, both COVID-19 and Sally have left their mark. Last year, the shelter housed 150 homeless people a night on average. But social distancing restrictions due to COVID-10 have cut its capacity down to approximately 60 available beds.

Now, because of flood damage, the only homeless people sleeping at Waterfront are the dozen members of its work training program who are helping with repairs. 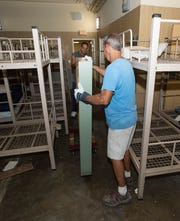 Reese, the Navy veteran, praised the shelter for helping him combat his addictions to drugs and alcohol. The Alabama native moved to Pensacola two months before Hurricane Sally.

“Well, it provided my food and shelter and truly provided men and women of God I’ve been searching for a long time — a place that could provide me spiritual guidance,” he said.

Like Reese, Michael Bowers has been living at the shelter for the past few months and said it has also changed his life for the better.

Bowers considers himself lucky to be part of the work training program. He knew basic construction skill before the hurricane flooded the facilities and because of his work helping repair the shelter, he still sleeps indoors, unlike some other homeless men he knows who are forced to sleep on the street.

“A lot of these people are people who are left in a lurch. They kind of spill over, and they are forgotten,” Bowers said. “You are talking about the underbelly of American here. It’s a situation that a lot of Americans do not want to talk about.”