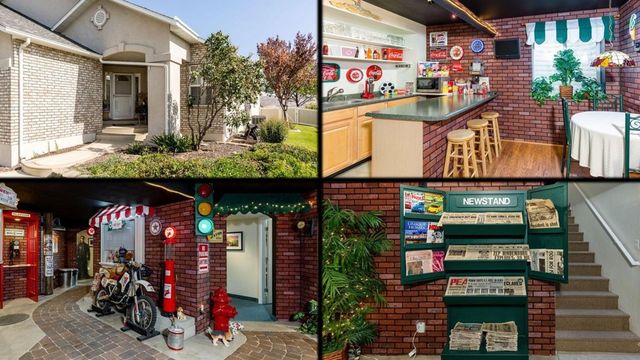 In a Nevada house that is now on the market for $445,000, it’s possible to take a stroll down Main Street without leaving the comforts of home.

The main floor of a home on Cottonwood Drive in Elko, NV, resembles many open-concept tract homes we’ve seen, but the basement is the real showstopper.

“The basement is like a little oasis to entertain people,” explains the listing agent, Gabriella Spring. “It has a fully functioning café, a barbershop, a 13-seat theater, and the walkways are cobblestone. It’s pretty cool.”

The home measures in at 4,116 square feet, with five bedrooms and three bathrooms.

“You have no clue [the basement is there] until you walk all the way down the steps,” Spring explains. “The upstairs is so nice and luxurious, so when you go downstairs, it’s refreshing. It’s a little escape.”

Everything on the lower level, including the two bedrooms and bathroom, fits in with the Main Street theme. The downstairs bedrooms have numbers on them, to resemble hotel rooms, and the restroom has a sign on the door.

“The bathroom downstairs has a urinal in it and a toilet—to make it feel like it’s in a movie theater, like a men’s and women’s restroom,” Spring says.

Other flourishes in the basement include a working phone booth, light poles, and even rubber mats that look like sewer covers.

“The newspaper stand in the basement actually has old newspapers from the 1980s and ’90s,” Spring says. “It took a lot of thought. The previous owners were really big entertainers, and a huge part of their life was doing this basement.”

The house was built in 2003, and the current owners have been living in it since 2012. The basement was already there, but didn’t look anything like what you see in the listing photos.

“I think [the original owners] wanted it to feel like a little town. So you go to the café and eat before you get your popcorn. You go to a movie, you go get your hair cut,” Spring says, adding that the barber shop has a real barber chair, scissors, and everything else a stylist would require.

And then there’s the home theater, designed to feel like a real night out at the local multiplex.

“It’s real theater seats. It has theater lighting, where it dims as the movie starts. The sound system is insane,” Spring explains. “It’s just like being in a movie theater.”

There’s even a ticket booth at the entrance.

The use of technology for entertaining isn’t limited strictly to the basement.

“They have a sound system upstairs that even that goes to the outdoors, and the speakers are in rocks,” Spring says.

The main level has an open-concept floor plan, with vaulted ceilings and a double-sided gas fireplace between the living room and a study.

“The kitchen is super custom, and has a china cabinet that’s built in. All the cabinetry with glass [also] has lights to light everything up,” Spring explains.

There are an abundance of cabinets, and plenty of room to sit down and eat.

The master bedroom has its own wing and has high ceilings and French doors leading out to a patio. The master bathroom has a soaker tub, double sinks, and a glass shower.

Elko is a town of around 20,000 residents in the northeast corner of Nevada. It sits almost midway between Reno and Salt Lake City, right off Interstate 80.

It may appeal to a buyer looking to escape the big city. Everything in this one-of-a-kind home is ready for a buyer who values a lot of living space and loves to entertain.

“I think this house really calls to everyone,” Spring says. “Everyone really does like to watch movies, and anyone that likes to entertain, this house is for them. If you entertain, whether it’s your kids, your grandkids, or anyone else, that’s who we’re looking for.”