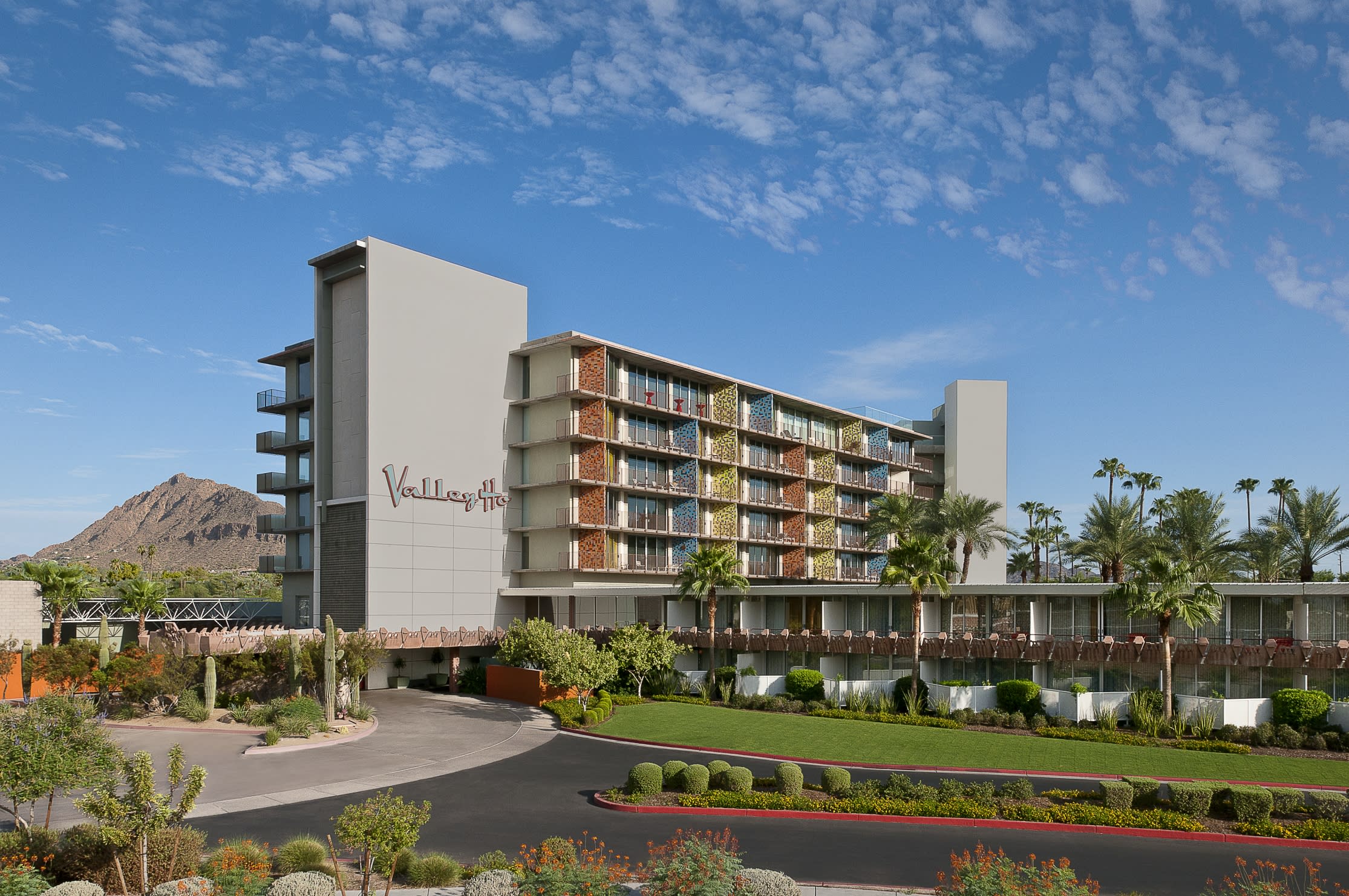 Travel may be challenging these days, but it’s still possible to take a break and get away from it all, and to do so in style — midcentury modern style, that is. With its sleek, clean lines, use of modern materials, and gravity-defying shapes and forms, midcentury modern design took the United States by storm in the post-World War II era and coincided with an uptick in leisure time and travel, leading to the construction of hundreds of hotels, motels, motor inns, and resorts across the country. While many have been significantly altered, if not demolished over the years, there are still many hotels that await your stay whether you’re in search of the perfect stiff martini, a poolside lounge, or some great architecture. Take a look at some of these iconic buildings below!

Originally opened in 1956 as one of Hilton’s first convention properties, The Statler, designed by architect William B. Tabler  helped put Dallas on the map as a center for business and entertainment. Its 19 floors and 1950s boomerang-shaped exterior today house 159 hotel rooms and 219 residences, along with restaurants, nightlife, and a lobby complete with vintage-inspired decor following a major renovation of the hotel. And fun fact: the hotel was first in the hospitality industry to pope music into its elevators. You’ll never listen to Muzak the same!

Constructed between 1974 and 1976 and topping out at 33 stories, the Westin Bonaventure is one of the most iconic hotels in Los Angeles — and not just because it’s the city’s largest. With its five circular glass towers and multi-storied interior atria with circular lounges that seem to float as if by magic, it’s a an excellent example of noted neo-futuristic architect John Portman’s projects. A  favorite of design-lovers for decades, it even features a revolving restaurant and bar at the top floor.

You’ll know you’ve arrived at The Verb near Boston’s Fenway Park by the vintage red bus that is permanently parked outside it, declaring the boutique hotel’s commitment to vintage design before you even step inside. The building — originally a 1950s motel called the Fenway Motor Hotel — today features 94 rooms that are each outfitted with a record player, a starter collection of vinyls, and you’ll find a curated collection of rare music artifacts throughout the property. But the best place to experience the hotel is poolside, where candy-colored umbrellas dot the property and you’re surrounded by the hotel’s white walls and multi-colored windows for a festive feeling.

The Lone Star Court in Austin will undoubtably bring you back to the vintage motor courts that served as its inspiration. Its 123 rooms marry Texas rustic with midcentury modern design, complete with Smeg refrigerators and a cheery, 1950s-leaning color palette of reds and turquoises alongside local materials, and rooms feature deep porches that channel  Texas hill country. There’s even a Texas-inspired swimming hole and a courtyard with fire pits.

Proclaimed one of the “best-preserved midcentury hotels in the country” by architectural historian and midcentury modern expert Alan Hess, Scottsdale’s Hotel Valley Ho was originally built in 1956 to the designs of local architect Edward Varney. Its dynamic exterior consists of lower-slung elements surrounding a pool that culminate in a taller tower-like block, where you’ll find colorful tiling that enlivens the outdoor terraces. An oversized fireplace in the lobby with natural stone is inviting on those cold desert nights, and the hotel is even a member of the Historic Hotels of America, a prestigious collection of historic hotels that value and maintain historical authenticity.

Palm Springs is known as a heavy-hitter for midcentury modern architecture, and the Parker Palm Springs delivers on the promise of glamour and design alike. Originally constructed in 1959 as California’s first Holiday Inn, it was a favorite in the 1950s and 1960s of Hollywood’s biggest celebrities. After a recent revamp by renowned interior designer Jonathan Adler, the 1950s-era getaway mixes punchy colors and patterns with more unexpected finds, like a seven-foot-tall bronze banana sculpture on the main lawn and orange front doors.