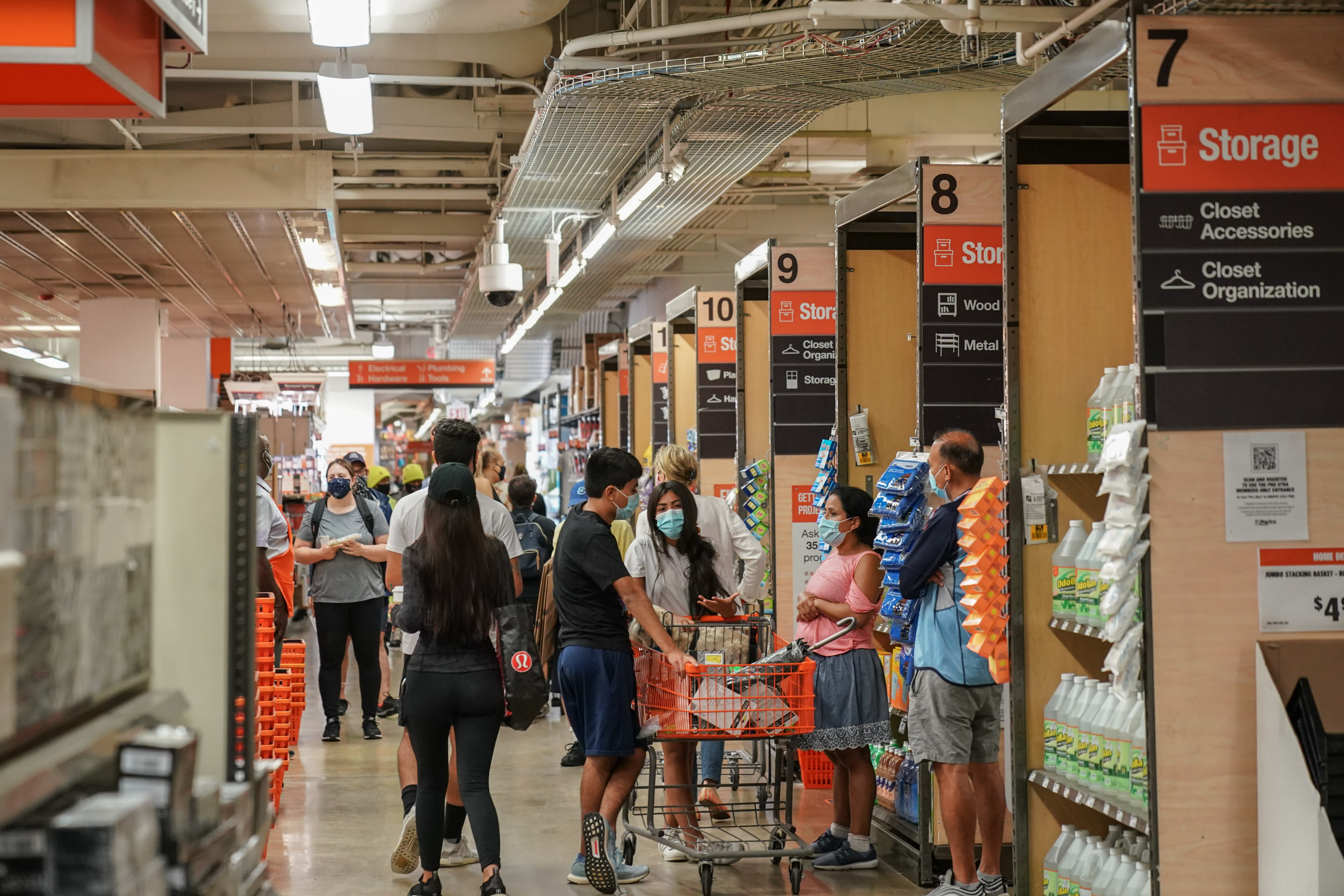 By the look of it, Americans have been rolling up their sleeves during quarantine and tackling those home-improvement projects. And investors seem equally eager to build a foundation for big gains on the resurgence of DIY.

With people spending a lot more time indoors, it’s no surprise home-improvement retailers Home Depot and Lowe’s have seen a huge boost to sales—and their stocks—in the past several months.

On Tuesday, Home Depot posted impressive second-quarter earnings, with profits soaring 24.5% year over year to $4.3 billion, while sales came in at $38.1 billion. And Bank of America analysts believe it “will not be the last of [Home Depot]’s strong run,” they wrote Wednesday. Lowe’s, meanwhile, posted a 30% surge in revenue for the quarter on Wednesday, with profits jumping a massive 68.7% from the year-earlier quarter, to $2.8 billion.

“Home is definitely the one place people are spending money on,” Edward Jones’s Brian Yarbrough recently told Fortune. “People aren’t going on vacation, so instead of spending that $5,000 or $10,000 on vacation, people are putting it into their homes.”

For Lowe’s, some of that boost may be temporary owing to the coronavirus, Morningstar’s Jamie Katz argued in a note Wednesday. But Katz believes the company’s “cost improvement is permanent, stemming from efforts that the management team has undertaken to improve merchandising and the supply chain over the past few years.” That means the DIY retailer will continue to grow (perhaps not at double digits, but around 2% to 3%, Katz offers) as the boost to home improvement should continue the rest of the year. (Read Fortune‘s interview with Lowe’s CEO Marvin Ellison.)

In turn, while archrival Home Depot’s growth may also lose a bit of steam, Katz expects gains to continue in the retailer’s third quarter.

But with all that growth, are the two stocks still worth getting into now?

Both retailers’ shares are up roughly 30% so far this year, boosted by their respective earnings this week. (From Tuesday’s close through Wednesday’s close, Lowe’s shares were up 0.2%, while Home Depot fell 0.75%.)

That means jumping on the bandwagon now doesn’t come cheap. Lowe’s ratio of price to estimated earnings for the next 12 months is around 21, which Morningstar’s Katz describes as “rich,” while Home Depot trades at around 26 times estimated forward earnings. The industry average is around 23 times forward earnings, per Bloomberg data.

“In the near-to-medium term, we continue to expect home improvement to comprise a larger share of consumers’ budgets while they are spending more time at home,” the BofA team writes. And although stimulus checks and enhanced unemployment benefits are beginning to wear off, analysts still see a bigger share of consumers’ budgets going to home improvement versus things like restaurants and travel.

In fact, in a survey, BofA found that homeowners said they were more likely to work from home (50%) than nonowners (34%), which “is likely to continue to fuel the wallet share shift toward home improvement in the coming months,” the analysts wrote.

There’s another trend afoot that may boost sales further for the two retailers: With mortgage rates at historic lows and an increasingly frothy homebuying market, the BofA team “continue to see upside to the renovation cycle.”

Indeed, with early evidence of an exodus from cities to suburbs amid shutdowns, new homebuyers may well be game to buy a fixer-upper. And while analysts note that “consumer spending on home improvement has experienced unprecedented strength relative to the more modest implications of the macro factors,” those factors tied to renovation activity are still encouraging, according to BofA.

Even if DIY sales taper off somewhat, BofA expects spending trends to “revert back to the longer-term trend of stronger growth among pros” as people feel more comfortable having contractors come inside their houses. That’s good news for Home Depot, which owes about 45% of its sales to professionals (that percentage is about 20% to 25% at Lowe’s). That means for investors, “It’s not too late to own [Home Depot].”

But how much higher could the two stocks surge from here?

Analysts at BofA just upgraded Home Depot to a “buy,” and they see the stock soaring another 16% from Tuesday’s close by year’s end. Lowe’s, meanwhile, could be pushing 11% upside this year, analysts at BofA suggest. (Both stocks boast heavy “buy” ratings among analysts broadly.)

While investors should understand that massive earnings beats likely won’t repeat themselves, the increasingly important role our homes are playing in our lives probably won’t be changing anytime soon. Mike Miedler, president and CEO of real estate behemoth Century 21, remarked to Fortune in July: “It’s now where you’re schooling your kids and working from. And it’s now your home gym—it’s everything to you.”

This story was originally featured on Fortune.com