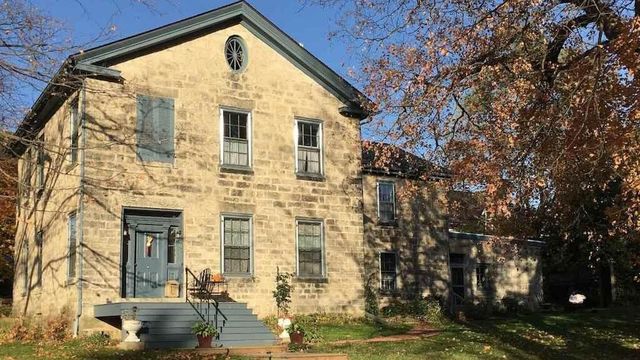 Because Brian and Diane Stuart weren’t actively looking for a home, you might say this property found them.

Built in 1839, it’s now for sale, and it’s also the oldest home currently on the market in the Badger State. After they purchased it a decade ago, the couple updated the property and rented it out to visitors in this artsy town 50 miles southwest of Madison, snug in Wisconsin’s Driftless Area.

“It’s built like a fortress,” says Brian. “The walls are 16 inches thick. Our dream was to bring it back to its original glory, which we did. We wanted the original footprint, which had large rooms, so people could see what it would have looked like. Some of our bathrooms are the size of a bedroom.”

Limestone mined by Cornish miners is just one of the sturdy materials used in the home’s construction. Other original elements include the marble fireplace and yellow-pine flooring. The Stuarts replaced the electrical and plumbing, bringing the property up to code.

They also converted the formal dining room into a kitchen designed for contemporary use. When they tore down the drywall, they discovered the original plaster beneath.

“A lot of the original features of the house were covered up. You don’t have the problems you might have with an old wood house,” says Brian, adding that the 125-year-old wood windows are in impeccable condition and only needed interior storm windows.

The historic home was constructed by Moses Strong, a settler from Rutland, VT, who wanted to create a home along the lines of those he’d seen in his home state. Strong was also a land agent for the Wisconsin Territory, before Wisconsin was admitted into the union in 1848.

“He built the house as a testament to his legacy,” says Brian. “He became pretty much one of the founding fathers in Wisconsin. He wanted a house that looked like it was in Vermont: simple, clean lines.”

In 2013, the Stuarts began to rent out rooms in the home to overnight guests via Airbnb. Their thought is that the next owner may want to follow suit, even choosing to live on site.

“It’s extremely flexible,” says Brian, of the home, adding that when you live in it, it’s obvious that it was designed to accommodate a large number of people.

For example, the staircases were utilized by the hired help.

The home sits on half an acre and has a waterfall and mature gardens.

The Stuarts are now ready to part with this amazing abode, since their leisure time is spent visiting their adult children, who live in different states.

“I would love for someone to care for the house like we do,” says Diane.

The post The Oldest Wisconsin Home on the Market, Built in 1839, Needs a New Historian-Owner appeared first on Real Estate News & Insights | realtor.com®.