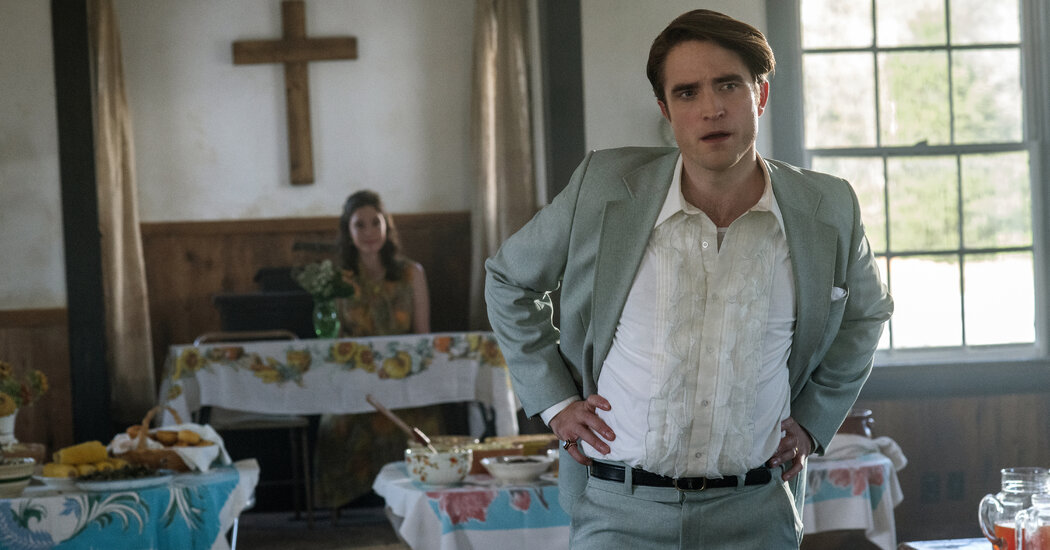 It’s a mystery where Robert Pattinson picked up the eccentric nasal whine that he (amusingly) deploys in “The Devil All the Time.” Pattison plays one of those bad preachers who ride through certain deep-fried fictions, the smooth talkers with scripture on their forked tongues and sin in their withered hearts. Sometimes these devious souls have “love” and “hate” tattooed on their fingers (or at least once watched Robert Mitchum’s unholy man in the 1955 noir “The Night of the Hunter”). However wicked, these bad men of the cloth invariably embody religious hypocrisy.

No one is up to any good in “Devil,” a leisurely wallow in the kind of flamboyant evil that some filmmakers just can’t quit, won’t quit. The preacher, Rev. Preston Teagardin, is the least of this story’s ills. By the time he does his worst, knuckles have been bloodied, bullets fired, a dog sacrificed and a man tortured, to list just some of this potboiler’s horrors, which also include a pair of industrious serial killers. Here, in a swath of Appalachia that stretches from Ohio to West Virginia — a land of green woods, white people and Gothic clichés — little rises but everything must converge.

Directed by Antonio Campos, the busy, sprawling movie centers on the manifestly unlucky Arvin, played as an adult by Tom Holland, best known as Spider-Man. A second Marvel alumnus, Sebastian Stan, plays a sheriff. The movie features other blurrily familiar faces, including those of Bill Skarsgard and Haley Bennett, who play Arvin’s parents. They met in an Ohio diner where she’s a waitress and he’s a customer, a World War II veteran home; that same day, a photographer (Jason Clarke) meets another waitress (Riley Keough). Arvin’s parents wed and settle in Ohio for their unhappily ever after; the other couple rides off to kill and kill again.

The coincidence of these two matches cleaves the story into not-quite parallel parts that eventually meet again. Until then, Arvin faces minor and major miseries, and ends up living with relatives in West Virginia. There, he mostly protects a family ward (Eliza Scanlen), whose own unhappy history involves a victimized mother (Mia Wasikowska) and odiously malevolent Bible thumpers. Every so often, the serial killers briefly pop up so that Keough can goose the movie. Things only really heat up for Arvin when Rev. Teagardin oozes into town, talking down to his flock and wearing a frilly shirt that doesn’t stay white for long.

Adapted from Donald Ray Pollock’s novel by Campos and his brother, Paulo Campos, the narrative is organized around a series of violent catastrophes. There’s a suggestion that war plays a role in these disasters, evidenced by both a grisly flashback to World War II and a nod to Vietnam. But like everything else in the movie — poverty notably included — war is something that people endure, like bad weather. Despite the wised-up voice-over (read by Pollock) that adds much-welcome glints of wry detachment, there is little sense that the people in this world do anything but suffer or cause others to suffer in between working, church going and occasionally popping out babies.

Campos, whose movies include “Christine,” has always been a capable craftsman, and everything in “The Devil All the Time” looks and sounds professionally engineered. The images are well lit and have shape and texture, and the music and sound design are equally well considered. (The veteran music supervisor Randall Poster is one of the producers.) Every faded dress looks attentively fitted, each ramshackle house artfully weathered. If the performances are considerably less persuasive it’s partly because Campos shows no interest in the inner lives of his characters. And while Pattinson’s and Keough’s roles are risible, the actors at least show signs of (comic) life.

Campos is interested in Arvin’s world or, specifically, its cruelties, but he demonstrates no real curiosity about it or its inhabitants. An early description to Arvin’s childhood hometown offers a rare longer view of these people, “nearly all of them connected by blood through one godforsaken calamity or another,” the narrator says, a direct quote from the novel. This inbreeding perhaps explains why there are no Black characters onscreen, though there’s a handful in the novel, mentioned in passing. Whatever the case, as a result all of the pain and anguish, all the drama and generational trauma, is experienced only by white people, one of the few directorial choices here of actual note.

The Devil All the Time
Rated R for gruesome, bloody violence against all creatures. Running time: 2 hours 18 minutes. In select theaters and on Netflix. Please consult the guidelines outlined by the Centers for Disease Control and Prevention before watching movies inside theaters.