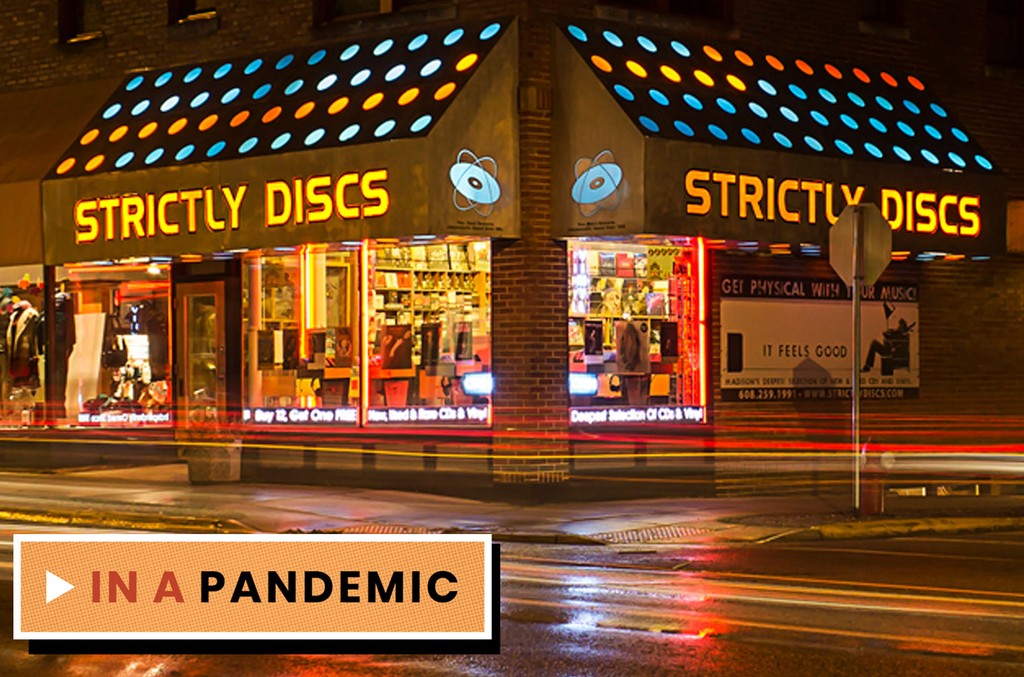 In October 1988, Angie Roloff and her husband Ron opened Strictly Discs in Madison, Wisconsin, after Ron left a career in the biomedical research field to pursue his love of music full time. Nearly 31 years later, the couple made the difficult decision to shutter in-store operations due to COVID-19, roughly a week before Governor Tony Evers forced a mandatory shutdown of all non-essential businesses. Now that the Wisconsin Supreme Court has overturned Evers’ stay-at-home order — ruling it “unlawful” and “unenforceable” — the Roloffs and their employees have reopened the store.

As part of Billboard’s efforts to best cover the coronavirus pandemic and its impacts on the music industry, we will be speaking with Roloff regularly to chronicle her experience throughout the crisis. (Read the previous installment here and see the full series here.)

How did Record Story Day go?

It went really well. We were nervous. There’s always a little bit of anxiety that goes with Record Store Day, because it’s such a big day and so many people come in and out of the store and you want them to be happy and satisfied. And then of course this year we just didn’t know what to expect, so there was anxiety with that. But it was really, really smooth, and people were happy and smiling behind their masks. We really felt like it was a victory.

And it was pretty brisk, business wise?

It was, yeah. It was busy all day. Us doing the register outside instead of inside got us through the line really quickly, so that was an extra bonus. Because that was a concern, having people waiting outside for a long period of time. We actually were able to open the store for essentially normal business at 10, which is when we normally open on a Saturday. We figured it would have taken us about four hours to get through the line of people that were waiting outside, but instead we were able to get through that and open the doors to the shop and proceed almost like a normal Saturday.

How’s everything else going?

Everything else is going okay. Classes on [the University of Wisconsin – Madison] campus start on Tuesday, so we’re kind of just waiting to see how that goes. Even today, the news on campus isn’t so good as far as the spread of COVID, and so we’ll see what the next week to two holds.

Are you referring to the sororities and fraternities where they had outbreaks?

Did you expect something like this was going to happen?

I’ve been reading this week about some other universities, both the successes and the failures they’ve had, and it just didn’t seem like here we were going to be set up necessarily to knock it out of the park, so to speak. So I think we were all just kind of waiting to see when some of this news would trickle out.

I mean, you get a bunch of college students together and they’re gonna do not smart things sometimes, right?

Absolutely. Espeically after the summer that they’ve had, they’ve probably felt confined and are ready to blow out the cobwebs and have some fun, which we can all relate to. But it might have some really dire conclusions.

There’s been the big Jacob Blake story going on in Kenosha, which is I think a couple hours from you guys?

Yeah, about an hour and a half.

Have those protests spread to Madison?

There have been protests downtown, and there was one night of some conflict with police. Otherwise it’s been peaceful. But I think it just, unfortunately, reminds us that we have a lot of open wounds everywhere.

Is there anything else you wanted to mention?

Last time we talked a lot about the post office. There seem to be improvements, as far as speed of at least domestic deliveries, since we talked two weeks ago, so that’s great. I still think, by and large, people feel optimistic. We really felt that on Record Store Day, when people chose to come out even with everything that’s going on. And I think people are anxious to persevere and keep some status quo things to the best of their ability.

I feel like we just can’t go back to the level of shutdown that we had in the beginning of the pandemic. Does it feel that way to you too, or do you still have this fear like ‘Oh my god, they might try to shut me down again’?

I completely agree with what you said. I think it would be very hard to go back, and I think it would have to take something really dire for people to get on board with something that was so drastic as far as the change in lifestyle. What we’ve seen is masks and distancing seem to work very well. I think as long as we keep going that route, hopefully we can all enjoy some freedom.