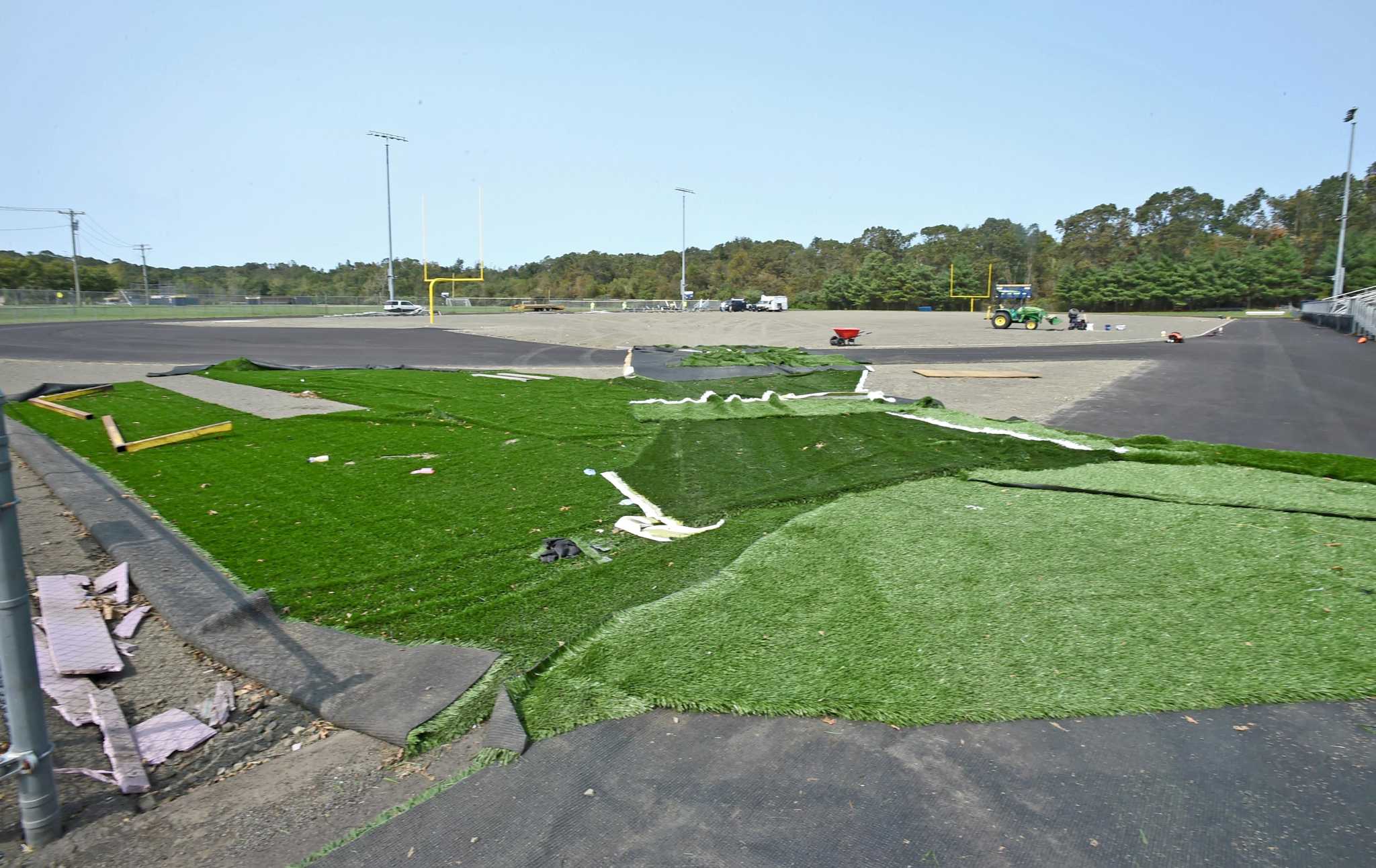 EAST HAVEN — Work has begun to rebuild East Haven High School’s Frank “Coach” Crisafi Field, which was destroyed by wind micro-bursts in the Aug. 27 severe thunderstorm — and the Board of Education this week gave the go-ahead to do repair work on home bleachers, which also were damaged.

The synthetic turf field — used by both the Yellowjackets football and soccer teams — should be completed by Nov. 2, Athletic Director Anthony Verderame told the Board of Education this week.

“The field is scheduled to be completed on Nov. 2 and we will have our last games for soccer that week,” Verderame told the board. “If we do not get the $10,000 to fix the home stands, we will not be able to use the facility for fans.

“It will just be the athletes competing,” he said.

“As of now they are scheduled to complete the leveling of the field which had to be redone after the storm,” Verderame told the board.

That work was expected to be done Friday and “Saturday they’re going to begin the track surfacing,” he told the board Tuesday. “By Oct. 15 the turf should be on-site. … and we’re looking at a completion date of Nov. 2.”

The total cost of the new turf and running track was $925,000 plus architectural fees of about $40,000, Verderame has said. Hera Sports Services LLC installed the turf.

The insurance company for the contractor that installed the field, which was nearly complete when it was destroyed, has accepted the contractor’s claim for $500,000 in damage, school and town officials have said.

Other than the field, itself, the cost breakdown includes:

$10,000 to repair “heaving” in the home bleachers, which were partially lifted up by high winds, along with the front railing. The Board of Education Tuesday night gave Verderame the OK to put that work out to bid, with the money expected to come from the board’s rental account.

$70,000 to repair the backstops on the adjacent baseball and softball fields, which also were damaged in the storm, Verderame said.

Eventually, $126,000-$140,000 to buy new away bleachers. The existing away bleachers, which were entirely flipped over by the winds, “were completely destroyed,” Verderame told the board. That work is not going to be done immediately.

Town public works crews “came in and made quick work of it, removed it and they’re going to be repurposing the majority of that material around our local parks,” Verderame said.

The school board originally was going to appropriate $10,000 to do the work on the home grandstands, the price quoted by the company that does much of the school system’s work of that type, but Superintendent of School Erica pointed out that because the job may cost more than $10,000, “it will have to go out to bid.”

Board member Lisa Geraci Anastasio, chairwoman of the board’s Building & Grounds Subcommittee, said overall damage was “pretty serious” and because of the cost to replace the away bleachers, “we’re going to hold off on that because we don’t need the away bleachers right now.”

Ultimately, he voted for it, however, and vote to put the home bleachers out to bid was unanimous.