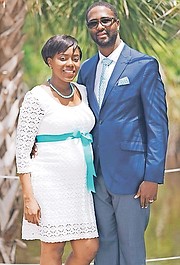 WHAT was intended to be a routine C-section for Kayla Edwards-Dean, ushering in the birth of twin sons, ended in the tragedy of her almost losing her life and her twins dying.

On August 18, the lives of Kayla Edwards-Dean and her husband, Tai Dean, were changed forever when she went to give birth at Princess Margaret Hospital.

“I came from my private physician around three, four o’clock that evening,” Kayla Edwards-Dean said.

“We started preparing because I had an elevated pulse and started to have some contractions. So I went into the hospital. My husband lifted my bag in the ward but no one is allowed to stay because of this COVID thing. A lady was there by the window and she asked, ‘What you come here for?’ I gave her my notes from my private physician and I gave her my discharge notes from PMH because I would have been on the ward about six days prior to that. And, then she told me to sit down.

“My husband was already gone. He called to check on me while he was on the road and I was still sitting there. I advised him that the lady had taken my notes in the back to get me services or to see the doctor. Forty minutes later my husband, still on the phone with me, asked me if the lady had returned to serve me. I told him no. I went to the door to inquire and she told me to go and sit back down.”

She alleged that this order for her to sit down turned into hours of sitting in extreme pain as her contractions got more extreme. She alleged that nurses and doctors passed her on that bench as she screamed out for help in pain, but no one really helped her.

“Some nurses were passing me and I begged them for assistance,” she alleged. “Then a doctor was passing and I stopped her as well and she asked if I am the person with the twins. I don’t know what was happening in the back as no one was coming out to assist me. I went again to the door and asked for assistance, at this point I really needed to use the restroom. The same lady told me I could not use the bathroom there and ordered me again to sit down.”

Mrs Edwards-Dean said the pressure of the contractions and desperately needing to use the bathroom made her approach the hospital worker again who allegedly told her she could not use the restroom there, but instead had to use it at an area past the Accident and Emergency Department. Mrs Edwards-Dean said the 10 minute walk back and forth to the restroom worsened her condition.

“My membrane had already ruptured,” she continued. “My water bag had already burst. I could have been dilated to four or five centimetres but no one checked me. I told everyone that it took a while after the whole thing to compute in my mind the lack of service. . . I was in shock, and thought how could I sit down here and let this woman treat me this way?

“What I am asking PHA is, is that the standard over here? How can I have been made to sit on a bench in full contractions until I started heavy breathing, throwing up and everyone going up in slow motion? I sat out there and I saw a doctor and told the doctor that I was having difficulty breathing and I was having full contractions. I was told once again to sit back on the bench. My husband was still on the phone,” she claimed.

For the past few weeks the Maternity Ward at PMH has been hit with allegations about the standard of care there, with some people taking to Facebook to recount their experiences.

On Sunday PHA managing director Katherine Weech told The Tribune she was aware of the complaints circulating on social media and said they are under investigation. Just after that, Minister of Health Renward Wells said he had not received any official complaint on any of the matters. 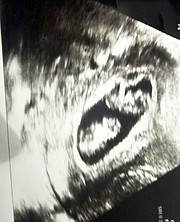 According to Mrs Edwards-Dean, her ordeal continued when the nurses’ shift came to an end and they started to pass her as they left. She said she reminded them that she was still there and even begged to lay on the floor as sitting on the bench in contractions was very uncomfortable. No one came to her aid, she said. Then came the tragedy. The twins she was expecting were stillborn.

“After hours and hours the person eventually came out and ordered me to ‘come in the back,’” she continued.

“They put me on a bed and they attempted to put an IV on me, I started to vomit. All of a sudden scans were ordered and it was noticed that I was not breathing properly. And, they checked the babies’ heartbeat. They said the babies were fine and put me to lay down and asked if I had anxiety. Someone asked me what my name was and then another suddenly remembered that I was in there before. Then they started asking me for my address.

“They moved me to another bed and I begged them to put me to sleep as the contractions were coming quick and strong. I already knew they were giving me a C-section so I just wanted to go to sleep. I got upstairs and they put me to sleep and when I woke up, I found out that my children had died. They never gave me a reason how or why the children died.”

After receiving the horrifying news Mrs Edwards-Dean asked to use the phone to call her husband whom she had not spoken to before she went into the theatre. She was then moved to ICU as her lungs started to collapse and she was having issues with her heart.

Those were lonely days for the mother of two as no family could visit her and she hardly saw any of the healthcare professions. It was not until after, she said, that she realised there was a sign on the door of the room where she lay that indicated suspicions of her being COVID-positive.

“They asked me if I was okay and if I took in the death of the twins,” she continued. “I asked them how my twins died and they told me that when I was taken back to the ward, I would see the doctor. They brought the children for me to see, but I never saw the doctor and I never heard what happened to the children. They scanned me again as they said my breathing wasn’t getting any better.

“They took me to ICU as there was an issue with my heart and lungs. Then I saw the doctor the next day. The doctor told me that the children were not breathing when they were born. I was also told that I had developed an infection. It would appear that the nurses thought that I had COVID and that’s why they hardly came to the room,” she alleged.

Mrs Edwards-Dean was moved back to the Maternity Ward.

After nine days of her family applying pressure, she was afforded treatment by a new doctor and her family was able to get information on her. She was later discharged. She said she is now left feeling weak and broken.

She recounted her harrowing ordeal in a recent Facebook post, which was widely shared. Since posting her ordeal, a petition against the treatment of mothers at PMH, originally started two years ago, was reignited and to date it has over 17,000 signatures with a goal of 25,000.

An official letter of complaint, from the Deans, was sent to the Public Hospitals Authority which is said to be investigating the matter.

While in opposition, Prime Minister Dr Hubert Minnis raised concerns about the state of PMH’s Maternity Ward at the time.

“The personnel and the babies, most particularly, are being delivered in this unhygienic environment and the personnel have been complaining for a while,” Dr Minnis said in 2014. “They have now closed it …draped it off with plastic so they know it’s mould infested and they know the staff has been complaining repeatedly about the excess sneezing and the excess coughing and respiratory problems. And, the staff has complained repeatedly about how the babies are exposed to this. Why would you expose our personnel and our new born babies to this?

“The government is obviously irresponsible and do not care; to have our personnel still exposed to this unhygienic area when the remedy is there and sitting so they cannot use an excuse that they don’t have money. What is more important? The lives of our medical personnel … our doctors … the lives of our babies.”