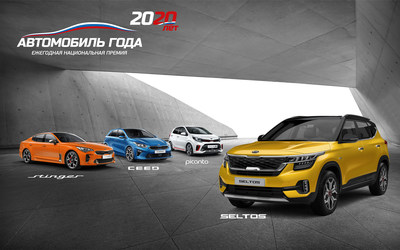 MOSCOW and SEOUL, South Korea, Sept. 15, 2020 /PRNewswire/ — Kia Motors has won a staggering four prizes at the annual Car of the Year Russia awards, with accolades for the Kia Picanto, Ceed, Seltos and Stinger.

The Car of the Year Russia awards is the most prestigious automotive award ceremony in the Russian automotive calendar. Held every year since it was established in 2000, the awards consider every car on sale in the Russian market, this year totaling over 300 models. The cars are judged by the Russian people in an online vote over a number of months, with more than one and a half million votes counted this year.

Kia’s compact city car, the Picanto set a new record for the company, taking honors in the ‘Best City Car’ category for the fifth consecutive year. The Kia Ceed built on its victory last year, branching out from ‘New Product of the Year’, to triumph in the ‘Small middle class’ category. The Kia Seltos took home gold in the ‘Compact SUV’ category, while the brand’s first ever gran turismo model – the Stinger – was named best ‘Grand Tourer’.

“The Kia brand has grown in popularity in Russia for many years, and we are extremely proud to have won four awards in the annual Russian Car of the Year contest as a result,” said Ho-sung Song, President and CEO of Kia Motors Corporation. “For Kia globally, Russia is one of our most important markets. We have worked hard to be the number one import brand with a 13 percent market share in Russia, and aim to continue our growth in the market in years to come. These four awards are extremely gratifying not only for Kia Motors Russia, but for Kia Motors globally.”

Managing Director of Kia Motors Russia and CIS headquarters, Alexander Migal, commented on the results of the Award: “We strive to offer cars that exceed the needs of Russian customers, and our success in the Russian Car of the Year awards – decided by motorists – is the ultimate endorsement of Kia cars. Each model is unique, yet united by common attributes – they are modern, high-quality, well-equipped and visually appealing vehicles. We are grateful to everyone who voted for Kia.”

The Kia Picanto compact hatchback retains its position as class favorite thanks to its striking design, spacious interior, interesting character and high levels of standard equipment. This is the second consecutive generation of Picanto to win the hard-fought ‘City Car’ category.

Winner of the ‘Small middle class’ category, the Kia Ceed is one of the most technically advanced cars in its segment. The Ceed family now provides the most diverse offering in the C-segment in Russia. As well as the standard five-door hatchback, the range also includes the Ceed Sportswagon, ProCeed shooting brake and the XCeed urban crossover.

The Kia Seltos has, in just six months, become one of Kia’s top-3 best-selling models in Russia. Sales in August 2020 alone show that 1,783 Russian customers opted for the compact model as their car of choice. They also selected Seltos as the ‘Best Compact SUV’.

The Kia Stinger confidently entered the highly competitive gran turismo segment, where the most prestigious brands are already well represented.