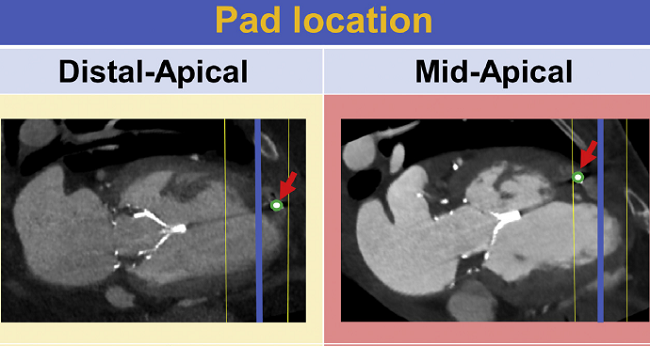 Favorable remodeling, as seen on CT, is more likely when the apical pad of the Tendyne system is closer to the true apex.

Transcatheter mitral valve replacement (TMVR) with the Tendyne system (Abbott) results in anatomic and functional improvements in the left side of the heart within a month of the procedure, with the gains related to how the device is implanted, a CT-based study demonstrates.

The prosthesis is held in place by a tether attached to an apical pad, and when that pad was placed closer to the true apex, it was predictive of a decrease in LV end-diastolic volume. Moreover, significant reductions in LV end-diastolic volume, LV mass, and left atrial volume were seen when the pad was placed in a distal-apical location, but not when it was in a mid-apical location.

This information “will become important, because as we try to refine and do improvements on the delivery of this device—understanding who are the patients who are going to derive benefit from it—we need to optimize our procedure,” he said. “And that’s what we are trying to demonstrate by this study.”

Commenting for TCTMD, Amar Krishnaswamy, MD (Cleveland Clinic, OH), said this study “is beneficial not only to understand how patients respond but also because [the researchers] demonstrate that differences in technique of the procedure and the way the valve is implanted actually has a bearing on the response to treatment.”

He continued: “We may need to find a balance between what is the ideal way to implant the device from a technical and procedural perspective and . . . from a patient outcomes perspective.” Before, said Krishnaswamy, there wasn’t much data to inform operators on how to achieve this balance.

TMVR is a potential option for high-risk patients with symptomatic mitral regurgitation (MR). Among TMVR devices, Tendyne has been used most extensively and is currently being evaluated in trials in the United States; the device received CE Mark approval in Europe in January 2020.

It’s important to assess how TMVR affects the geometry and function of the left atrium and left ventricle, the authors say, but echocardiography has limitations in this regard. Cavalcante explained that imaging the LV apex can be challenging using echocardiography, with CT being much more accurate. Although CT angiography (CTA) has been used for patient selection and procedural planning, it has not been used routinely for patient follow-up.

With this study, the investigators performed an in-depth analysis of CTA evaluation after TMVR with Tendyne. They analyzed data on 36 patients (median age 74 years; 78% men) with symptomatic grade 3 or 4+ MR who underwent the procedure between April 8, 2015, and September 5, 2018, either as part of a feasibility study or under compassionate use. Most patients (86%) had secondary MR.

The procedure eliminated MR in all patients, with no valvular MR, significant paravalvular leak, or mitral stenosis.

Krishnaswamy said there’s been a long-standing concern that reducing MR in patients with ventricular dysfunction may worsen ejection fraction because of the loss of that regurgitant volume. “The interesting thing that this analysis shows is that while that’s true, that the ejection fraction does go down somewhat, the forward flow across the ventricular outflow is actually greater, so that mild loss in ejection fraction is overcome by the improved forward flow,” he explained. “And we know clinically that that’s true—that’s why we treat patients with severe MR and LV dysfunction—but I think this analysis is beneficial to help us understand that dynamic a bit better.”

The investigators report other favorable changes as well. There were reductions in both LV mass (from 126 to 116 g; P < 0.001) and left atrial volume (171 to 159 mL; P = 0.027). Global longitudinal strain declined, and the left ventricle became more spherical.

The vast majority of patients (83%) had a reduction in LV end-diastolic volume, with the rest having increases. Transmural scar, seen in 31% of patients at baseline, did not influence reverse remodeling seen in the first month after implantation.

In highlighting the need to optimize treatments of patients with secondary MR, Cavalcante pointed to the COAPT trial, which showed that transcatheter mitral valve repair (TMVr) with the MitraClip (Abbott) reduced both heart failure rehospitalizations and all-cause mortality in patients with heart failure and severe functional MR relative to optimal medical therapy. A recently published analysis of the trial showed, however, that more than half of the MitraClip patients (53.8%) were considered nonresponders.

“That goes to show that we need to improve our selection criteria. We need to understand that the problem is also in the muscle,” and not just the valve, he said. Cardiac CT does a great job providing information about remodeling, whereas cardiac MRI can do an even better job revealing the amount of fibrosis in the heart, he added.

An important outstanding question is whether the favorable remodeling observed in this study is related to clinical outcomes—that is the “million-dollar” question, Cavalcante said. His group is currently exploring that issue, as well as the implications of apical pad location, in a larger cohort followed up to 1 year. “We know that this technique is quite powerful when applied to the right patients, when also delivered in the proper manner,” he said.

Krishnaswamy said that improvements in atrial and ventricular size are likely to improve prognosis, “so in that regard we would hope that the changes seen in the very early 30-day CT scans in these patients would translate to better outcomes for patients down the road.”

In an accompanying editorial, Michael Nabauer, MD, and Mathias Orban, MD (both of Ludwig-Maximilians-University, Munich, Germany), note that the ongoing SUMMIT trial is comparing TMVR with Tendyne and TMVr with MitraClip in patients who are eligible for both devices. Also, the ongoing APOLLO trial is comparing a different TMVR prosthesis (Intrepid; Medtronic) with surgical MV replacement in high-risk patients.

“It is hoped that both trials will provide insight in patient selection to achieve optimal procedural and clinical outcomes of the different treatment approaches,” Nabauer and Orban say.