EMUI 11 also brings an updated design to the phone’s stock gallery app. The pinch gesture support has been included, similar to the one in Google Photos. We’ve seen more and more galleries do the same thing. This will allow you to switch between the Month and Day view.

The Albums tab has a new 4:3 layout, and new sort options. The animation engine has also been tweaked by the company. This resulted in a different set of animations, which are expected to minimize distractions while you’re using the phone. 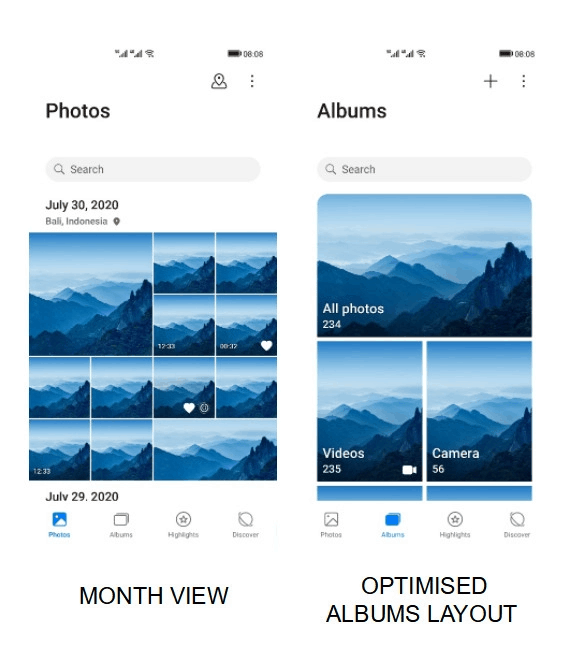 This variant also brought a new feature called “Live Icons”. ‘Live Icons’ are basically new, animated icons that the company opted to add in EMUI 11. They can be found in the notifications panel, and various Huawei applications.

A feature called ‘Smart Multi-Window’ is also here, and it allows users to adjust the size of floating windows and minimize them when they’re not in use. You’ll also be able to open apps in floating windows, from a dock.

EMUI 11 also adds some new privacy features, and some AI improvements as well. Multi-screen collaboration 3.0 is a new AI feature. It allows users to simultaneously control three phone apps on tier PC, accept calls on a connected PC, and also use the device as a document scanner.

Now, when it comes to privacy, you’ll now see a new indicator icon in the status bar, which will indicate when an app is using your phone’s camera, mic, or location.

The Gallery app has received some security improvements as well, including on-device AI processing support, for example. These are only some changes in EMUI 11, as the company didn’t talk about absolutely everything, of course.