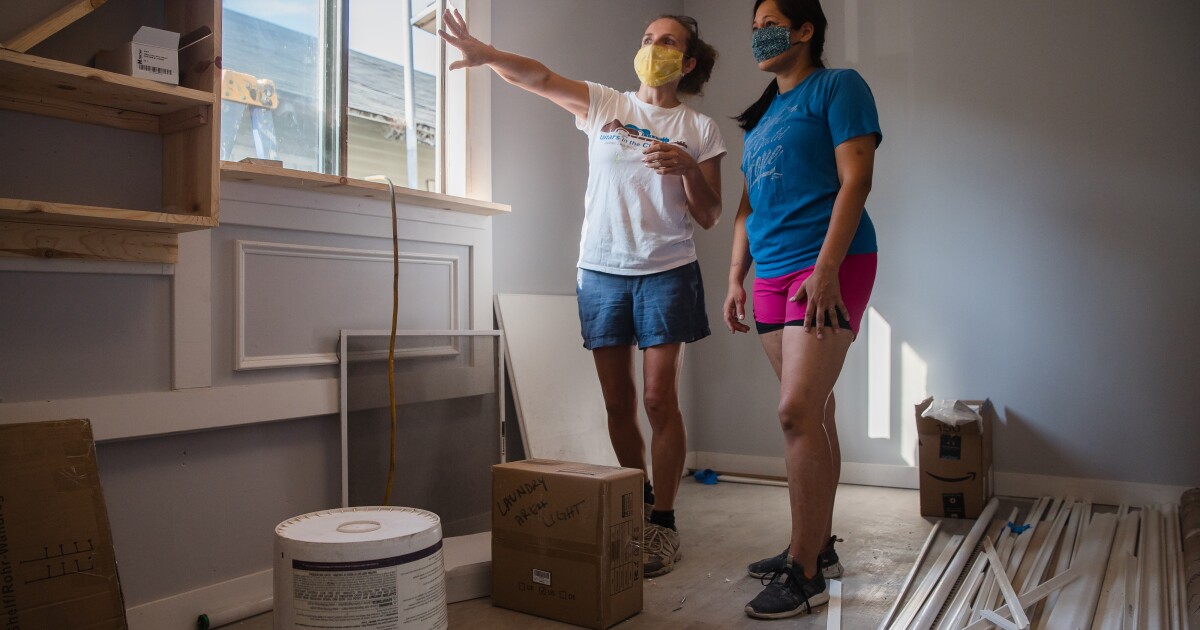 Ruth Haller was on her hands and knees, crawling as she pulled the heavy-duty construction material up from the floor of the home she is remodeling in Barrio Logan.

“As you can see, it’s not glamorous,” she said of the work.

The pair have been working on the South 26th Street home for more than a month. They plan to finish next week and place the 1930s Craftsman up for sale.

The work is not all for profit.

The Girls with Power Tools proprietors plan to use 10 percent of the proceeds from the sale of the home to purchase laptop computers for students in the neighborhood or in other parts of San Diego. They are also considering purchasing wireless internet cards for needy families.

Haller will dedicate another 10 percent to Guitars in the Classroom, a Mission Valley nonprofit that trains educators on using music to enhance education.

Haller said it feels wonderful to give back to the community where she started her teaching career, and where she feels at home. She spent nearly nine years at Emerson-Bandini Elementary, which is less than two miles from the house on South 26th Street. Later she transferred to Webster Elementary.

“I love coming back to the neighborhood I started in … being here … it just feels good to go down the street every day and see everything that I love about being Mexican,” Haller said.

Macias and Haller started their home-renovation company earlier this year, after flipping four other properties independently.

Macias was a Realtor and eviction agent before she began helping clients with distressed properties by renovating the homes.

With the pandemic in full swing, and a temporary ban on evictions, there was not much work for Macias so she decided to dedicate her time to renovating the house in Barrio Logan.

Haller took time off from teaching to help her daughter with a newborn baby, so she had time on her hands to focus on house flipping.

Although the home-renovation field is dominated by men, the two Encanto women say that focusing on finishes and other details of a home gives them an edge that makes them stand out.

“It always makes me feel good when the buyer’s agent will tell me that when their client first walked on the property it felt like home,” Macias said. “They felt comfortable like this is going to be their sanctuary, and that’s what’s important, that’s what home is supposed to be.”

They tore down walls, added new floors, built a day bed, installed wireless lighting and built a vertical gardening wall in the backyard — all ideas mostly inspired by do-it-yourself tutorials on Pinterest and YouTube.

“When she and I learned how to do tile, we just watched a YouTube video and bought the machine at Home Depot,” Macias said, laughing.

Macias said as a new company, it also helps to be resourceful by shopping around for better prices online as opposed to getting materials and items from traditional home improvement retail stores.

Macias said that often when someone goes in to renovate a house, they forget to preserve the characteristics of the neighborhood, which is why she plans to incorporate art into the design of the home to match the artistic community of Barrio Logan.

The home will have two colorful wooden gates out front inspired by the murals of Chicano Park. It will have colorful round fish-scale panels on the roof to match the gates.

“When flippers come into areas, that’s where you see a transition of culture flowing out of neighborhoods,” Macias said. “What I love about Chicano Park is all the murals and how they are dedicated to our Hispanic heritage, so rather than doing just a regular run-of-the-mill exterior I wanted to tie in color, I wanted to keep what this area is about … art and culture.”

Macias and Haller have gotten creative on creating more space inside the 800 square foot home. They knocked down a wall to give the appearance that the dining area and kitchen are bigger. They also installed collapsible floating desks for two of the rooms, so the family that ends up living there can save space.

“There is just so much life and color and vibrancy,” Macias said of the community. “This property has a lot of character.”

They plan to continue remodeling homes and grow the company with different projects.