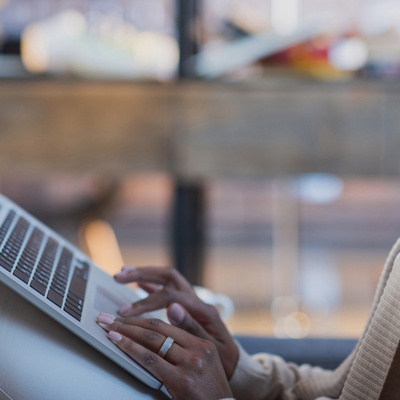 To have a job without a workplace, you must build an office of the mind. Structure, routine, focus, socialization, networking, stress relief—their creation is almost entirely up to you, alone in a spare bedroom or on your couch, where your laptop might vie for attention at any given moment with your pets or kids. If the coffeepot runs dry, there is no one to blame but yourself.

The first time I undertook this construction process was in 2009, and it was an abject failure. I was nine months out of college and had already been laid off from my first full-time job, thanks to Wall Street’s evisceration of the American economy. A woman I knew only from an internet message board hired me to write blog posts for her fashion website, a stroke of luck that turned me nocturnal within six weeks. I lived like a 13-year-old on perpetual summer break—no gods, no masters, no parents, no bedtime. It took two years for me to meet my co-workers in person, and I often fantasized about eating lunch with a live human being, or even just bumping into one on the way to the bathroom. What would it be like to have “work clothes” again? I had never expected to miss driving 45 minutes to sit at a desk in a makeshift office above a country-club pro shop, where, in my first full-time job, I’d done menial tasks in the marketing department.

[From the May 2020 issue: After the pandemic, the office dress code should never come back]

At first, I assumed my setup would soon be common, and therefore somehow better—we’d all build our internal offices together. “There’s no stopping it,” a Reuters writer proclaimed a few months after I began my blogging gig. “The work force that fuels tomorrow’s small businesses may largely be a stay-at-home crowd.” Laptop prices were shrinking, and more employers were issuing them to their workers. Smartphones started to fill Americans’ pockets. Skype was well established as an early leader in videochat, and co-workers silently traded jokes on GChat. The Great Recession would force a reckoning in how stuffy old companies operated, and offices would soon be obsolete.

Then it just didn’t happen. In fact, something like the opposite happened: Co-working spaces sprang up for people without traditional offices, and the concept attracted hundreds of millions of investment dollars and, for a couple of years, my patronage. In 2018, I finally got a regular job. I sometimes ate lunch with my new colleagues. I bought a fancy water bottle for my desk. After a few months of commuting, I understood the allure of podcasts.

Now a once-in-a-century pandemic has resurrected the abandoned future. I’m back on my couch, along with millions of other Americans. And as soon as we were remanded to our homes in the spring, the predictions of a decade ago sprang back to life: If the COVID‑19 experiment has proved anything, it’s that employees can be productive without being physically present, so why not jettison expensive corporate leases and free everyone from commutes? But the longer people spend editing spreadsheets or taking conference calls at the kitchen table, the more obvious it is that workers lose far more than physical space when they lose their office.

“There are tons of studies on the positive benefits of teleworking, but most of that research is interviews and surveys with people who have self-selected into remote work,” says Kati Peditto, an environmental-design psychologist at the U.S. Air Force Academy. Workers who value day-to-day flexibility in their schedules are ideal work-from-home candidates; those who like strict boundaries between their professional and personal lives, not so much. Career positioning also matters—people who have already built strong social and professional networks may not suffer much from the lack of face-to-face contact at the office, but for those still trying to make such ties, remote work can be alienating.

[Derek Thompson: The workforce is about to change dramatically]

Contrary to managerial paranoia, people generally want to be good at their job. To do that, many need the support, collaboration, and friendship of colleagues, which is more difficult to foster online. “Outside of immediate family, people’s co-workers become their most consistent opportunity for social interaction,” Peditto told me. “What happens when you lose that is one of my greater concerns.”

Americans were struggling with feelings of loneliness so widespread that they were considered a major public-health burden even before the pandemic began, and the virus has only exacerbated that problem. I don’t suggest trying to eat lunch with a friend on Zoom—watching yourself wolf down a salad on video is horrific. Even if you’re not eating, watching yourself do anything on Zoom is pretty bad. There are plenty of awkward pauses, weird shadows, glitchy Wi-Fi connections, and unfortunate angles, along with ambient anxiety about whether or not your hair always does that. Unfortunately, it’s hard to avoid watching yourself on Zoom at all times, because of the software’s display and the stubborn human desire to stare at one’s own face.

[Juliette Kayyem: Never go back to the office]

The social by-products of going to work aren’t found only in shared projects or mentoring—many are baked into the physical spaces we inhabit. Break rooms, communal kitchens, and even well-trafficked hallways help create what experts call functional inconvenience. “We have these interdisciplinary connections because people have to take the stairs, or the bathroom is on a different floor,” says Peter Berg, the director of the School of Human Resources and Labor Relations at Michigan State University. “Moving through that space in an inconvenient way is really important to connection.” People end up talking to their co-workers—complimenting a new haircut, asking how the kids are—when they’re corralled together waiting for the elevator or washing their hands next to each other in the bathroom. Over time, those quick encounters build a sense of belonging and warmth that makes spending so much of your life at work a little more bearable.

[Read: The end of open-plan everything]

“You talk to people who really felt excited for the first few weeks of remote work,” Peditto said. Among other benefits, who doesn’t relish the chance to be out from under the literal watchful eye of a supervisor? But now a fair number of the early enthusiasts are starting to go stir-crazy, she said, with no relief on the horizon and, maybe worse, no one to commiserate with at the office microwave for the 90 seconds it takes to nuke last night’s spaghetti.

When i began working from home at 23, I soon realized that the potential harm wasn’t limited to my sleep schedule or my mood. Even if I successfully made myself a disciplined, 9-to-5 worker bee, I was far removed from the structure of my career itself. For the first few years, I had an inexpensive apartment in a small town that I loved, but it was far away from New York City, the country’s fashion capital. I wasn’t meeting anyone else who did similar work, wasn’t being invited to anything, wasn’t getting introduced to any friends of friends. If I had wanted or needed a new job, completely changing careers would probably have been easier than getting another gig in my field with the experience I’d accrued at home.

Moving to New York a few years into the job helped, but it didn’t totally solve the problem—I was still the girl on her laptop in her bedroom, trying to make people from Twitter like me enough to meet a stranger for an after-hours drink. After you’ve left the ready-made social environment of school, an office is a natural place to look for new people who share your interests and outlook. But with no place to go to but just as many professional obligations, people working from home might have the flexibility to do everything except make new friends.

Even those who self-select into the work-from-home “lifestyle” report feeling distant from new professional opportunities, outside their companies as well as inside, Peditto told me. Deprived of desk neighbors, impromptu coffees, and any real way to, for a lack of a better term, read everyone’s vibe, she said that new hires and young people who work remotely risk remaining unknown quantities. And unknown quantities don’t become beloved colleagues, or get promoted. How you begin your working life tends to shape your professional and financial prospects for decades to come. Those who were just starting out during the financial cataclysm of 2008 and the recession that followed have had their fortunes stunted by it, and many will never recover. For recent graduates beginning work via Zoom in the twin chaos of a pandemic and a financial crisis, the impact could be even more profound.

Women—of all ages—particularly suffer when telecommuting, Berg told me, with fewer promotions and slower wage growth. Employers already tend to assume that women, and especially mothers, are less dedicated to work than their male counterparts are, no matter how hard they toil. If those same women seek permission to stay home for good—opting out of the “face time” that many of their bosses hold irrationally dear—it could encourage the assumption that they’re sitting on their couches eating SkinnyPop and watching HGTV.

[Read: The coming setback for women in the workplace]

Good employers can account for those biases in their work practices, and theoretically, workers can organize their colleagues to pressure management toward better accommodations, such as expansion of parental leave and greater transparency in pay. But those efforts, including forming a union, are much harder when people can’t meet face-to-face. A dispersed workforce means that employees have to go out of their way to compare experiences with one another, and that those with relatively little power have a tougher time sensing who their allies might be.

Ultimately, that might be the biggest problem of working from home in perpetuity. Workplaces are complex social ecosystems just like all other places humans inhabit, and decentralizing them can obliterate the things that make them satisfying: knowing eye contact with a co-worker when a change you’ve been begging for is finally announced. A slightly-too-long lunch break with your desk neighbor because your boss is in meetings all day. Giving a presentation to your peers and watching them receive it well. Figuring out whom you can rely on, and whom you can’t. “There’s so much unspoken that you absorb as an employee,” Peditto said. “You don’t get that right now with just a set of scripted meetings.” At home, though, you probably get better coffee.

This article appears in the October 2020 print edition with the headline “A Cubicle Never Looked So Good.”

This article was originally published in The Atlantic. Sign up for their newsletter.