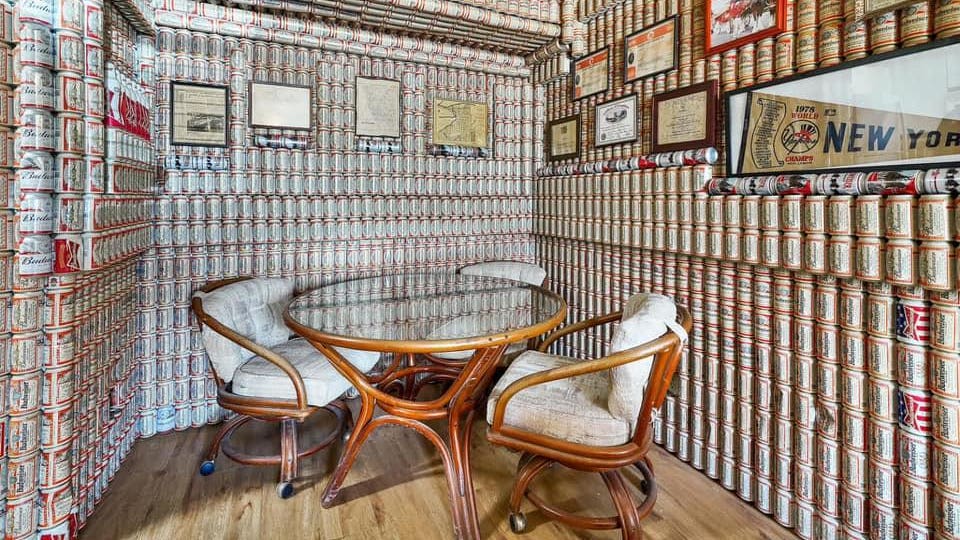 Do you like Budweiser? I mean really like it? Well chances are slim that you enjoy the so-called ‘King of Beers’ as much as the former owner of this condo in Lake Worth, Florida. Located just south of Palm Beach, the 815-square-foot property—with two bedrooms and two baths—is covered from floor to ceiling in empty cans of Bud. That’s thousands of branded aluminum cylinders in total.

Although it went on the market earlier this year, the listing only recently started getting national attention after the country’s largest brewery posted it to their Facebook page. Accompanied by the sarcastic caption, “The perfect house doesn’t exi-”, it now boasts over 1,000 likes—and counting. The house, meanwhile, was originally priced at $110,000, but didn’t attract any offers until the asking cost came down by $10,000. As of today, there are multiple bids, with one currently under contract.

Of course, plenty can change during an extended escrow process. So if you want to put in an offer, a small window remains open—however remote. But it’s important you know what you’re getting yourself into. Outside the unit there’s scant evidence of the stunning sight that lies within. In fact, it sits on the ground floor of a fairly nondescript, multiple unit residence with yellow, stucco facade. A screened-in entry vestibule modestly hints at the interior aesthetic, with three vintage Budweiser signs bolted to the wall.

Although the former owner’s degree of devotion is quite curious—to put it politely—his overall love for the liquid is shared by millions of drinkers across the globe. Founded in St. Louis, Missouri in 1876, the company fortunes skyrocketed beginning in the post-Prohibition era of mid-20th Century America. Today, Forbes has the company valued at just under $29 billion USD. That’s enough to rank it as the 21st most valuable brand in the world.

In 2008, it was acquired by InBev to form ABI—the world’s largest beer producer. Although if they’re looking to get into the home interior business, they’ve still got a long way to go.

In the meantime, there’s nothing stopping a budding hobbyist from creatively re-using their empties however they see fit. According to the listing agent back in Lake Worth, it was the lifelong mission of the original tenant—now deceased—to wallpaper his home in cans of his favorite beer. Frustratingly out of reach for the vast majority, very few of us will ever actually get to live out our dreams. So let this serve as a heartening reminder: always aim low and you probably…can.

Check out more pictures from inside this aluminum-lined abode here.