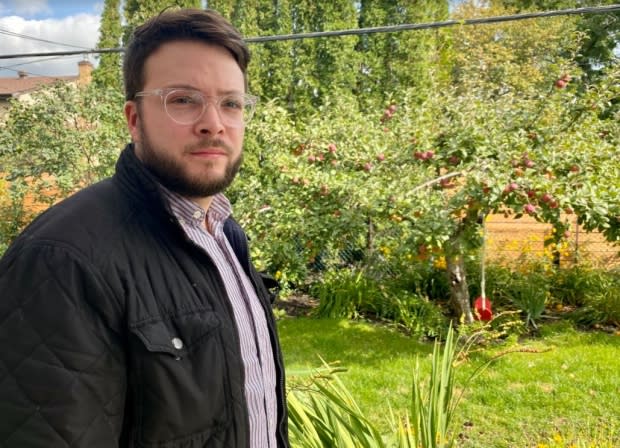 “She was very authentic — very Italian,” said Campanozzi. “She loved to cook for us. She loved to bring food.”

Campanozzi said his aunt was like a second mother to him, and learning that she was killed by a hit-and-run driver while she crossed a busy intersection in Montreal’s west end was devastating.

“A lot of pain and a lot of anger mixed together,” Campanozzi said. “We had the chance to stay with her until her last moments. Her last breath.”

Zanca was 84 years old. She was hit on Sept. 10 at a busy, five-way intersection in Notre-Dame-de-Grâce that has long been the centre of a safety debate. She died the following evening.

She was crossing where Décarie and De Maisonneuve boulevards meet Upper Lachine Road when, police say, she was struck by a red pickup truck whose driver fled the scene.

The incident is still under investigation.

“If you have any information —  I mean anything — please contact the SPVM,” Campanozzi pleaded.

He said he hopes somebody will come forward with information that will help bring closure to his family.

Zanca’s death has renewed calls to make the intersection safer.

The five streets come together near Vendôme Metro station, which serves as a transit hub for buses, taxis and a train.

The McGill University Health Centre is nearby, as is the Queen Elizabeth Health Complex, packed into a dense neighbourhood loaded with commerce.

Running through it all is the de Maisonneuve bike path, creating a situation where bicycles, cars, trucks, buses and pedestrians are zipping through an intersection that was clearly designed for motorized vehicles to get through quickly without the safety of others in mind, says Jason Savard.

Savard is a spokesperson for the Association of Pedestrians and Cyclists of NDG, a group that has long been pushing for safety improvements to the intersection.

He said sidewalk extensions with sharper angles could slow drivers and reduce the amount of time it takes for pedestrians to cross the street. His group also wants all vehicular traffic brought to a stop when pedestrians want to cross.

That four-way stop configuration is seen on Sherbrooke Street through Westmount and is commonplace at major intersections outside of Montreal, but the model is largely unused in the city.

“There’s just a lot going through that intersection and there’s just not enough time for the most vulnerable to cross it safely,” said Savard, citing the death of a 89-year-old man back in November as an example.

“It’s a large, wide intersection so that also makes it longer for pedestrians to cross.”

Promises to re-envision the sector date back more than a decade, when Michael Applebaum was borough mayor.

Back then, Projet Montréal Coun. Peter McQueen was lobbying hard for a pedestrian and bicycle bridge over the intersection, but his party was heavily outnumbered in the borough and at city hall.

Now Mayor Valérie Plante is at the helm and officials will be improving the intersection this fall, McQueen said.

“I have pushed, and our administration is fully backing changing and improving the lights at this intersection to give more time to pedestrians and cyclists,” he said.

“That’s what we have always wanted to do.”

The reconfiguration of the lights is happening later than hoped, he said, because the Ministry of Transport wanted to maintain the status quo while the Turcot project was underway.

With the St-Jacques Street bridge open and other changes coming to surrounding streets now that the Turcot project is winding down, there will be fewer cars passing through the five-way intersection, McQueen said.

“It was in the budget that this intersection be overhauled and it has since been taken out of the budget,” she said.

“I would like to ask Valérie Plante why, because we have had 20 serious accidents here in five years, including just in the last year, two elderly people tragically killed.”

Montgomery said it is urgent that something be done.

“It is one of the most dangerous intersections in our city,” she said. “Just because it is in Côte-Des-Neiges—NDG, doesn’t mean it should be ignored by this administration.”

WATCH | Mathieu Campanozzi hopes his aunt’s death will be a wake-up call for the city: