Crown Craft (CRWS) came through a screen we ran where the objective was to find dividend-paying companies trading at low valuations. Crown Craft at present is trading with a P/E of 8.7 and is paying a forward dividend of $0.32, which currently equates to a yield of 5.61%. Being well above average, the dividend is a great place to start when researching the company. The reason being that the sustainability of dividend encompasses the income statement, cash flow statement as well as the balance sheet. 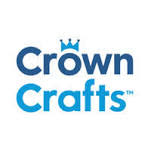 Suffice it to say, the holy grail of value investing is to buy companies that are undervalued and which also return plenty of the company’s cash flow to shareholders. We state this because dividends have accounted for almost half of the gains of the S&P 500 over the past century.

In saying this, Crown Craft’s dividend of $0.32 per share has been at this level since 2013, so growth has been pretty much non-existent. Although the yield looks favourable as mentioned above, the lack of growth will certainty detract some investors. The reasons being that growth:

To see if the lack of dividend growth is growth-related, we go to the company’s income statement. Although net income and EPS have grown since 2013, operating income as well as top line sales have actually fallen during this period. The float has more or less remained the same, but it is clear that the dividend has not been raised due to the clear trend of poor EBIT growth.

Despite the lack of growth, Crown Craft has been able to generate solid cash flows, which have paid for the dividend in recent times. The trailing cash flow payout ratio comes in at 46%, as free cash flow per share on average over the past four quarters was $0.69 per share.

Assets, though, have outpaced liabilities over the past seven years, which is encouraging. In the latest report, $43.7 million of equity was reported on the balance sheet, as opposed to liabilities of $16 million. Followers of our work will be aware of how we favour stocks with plenty of assets and equity on the balance sheet. This is because assets are essentially the roots that bear the tree when it comes to earnings growth.

Some bulls may state that we have already witnessed the fruit of this asset growth on the income statement. Net income grew by $1.6 million last year, or $0.15 per share, to hit $0.65 per share. Analysts who follow CRWS expect earnings as well as sales to be pretty flat this year compared to last year.

One of the key metrics which is facilitating sustained earnings growth is the firm’s growing margins. Over a trailing average, Crown Crafts’ gross margin comes in at 30%, which is the highest number we have seen from this key metric in many years. Net income margin comes in at 9%, which is a direct reflection of how costs have been declining at the firm as well as improved efficiency.

One of the key reasons why margins are growing is the company’s internet business. Crown’s two-pronged approach of selling directly to the customer as well as through its e-commerce partners served the firm very well in the first quarter. In fact, because a lot of brick-and-mortar retailers were closed due to the lockdowns in the beginning of the year, Crown most likely has gained a lot of market share due to this.

Nevertheless, from a technical standpoint, we see that we have a possible head and shoulders topping pattern in play, which is a bearish pattern. We state this because shares tried late last year to break out above their 2016 highs but failed. Also, the technicals are illustrating that momentum is being lost, so longs need to be cautious at this stage. 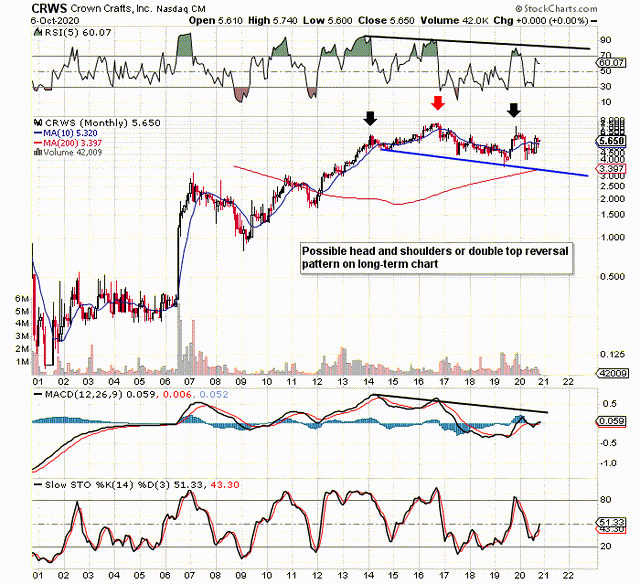 Therefore, to sum up, although CRWS has a compelling valuation and is healthily profitable at present, the technicals are sending worrying signs. Our play here would be to wait for heavy resistance to be taken out before entertaining any thought of taking a position. Let’s see what the second quarter brings.

Elevation Code’s blueprint is simple. To relentlessly be on the hunt for attractive setups through value plays, swing plays or volatility plays. Trading a wide range of strategies gives us massive diversification, which is key. We started with $100k. The portfolio will not not stop until it reaches $1 million.