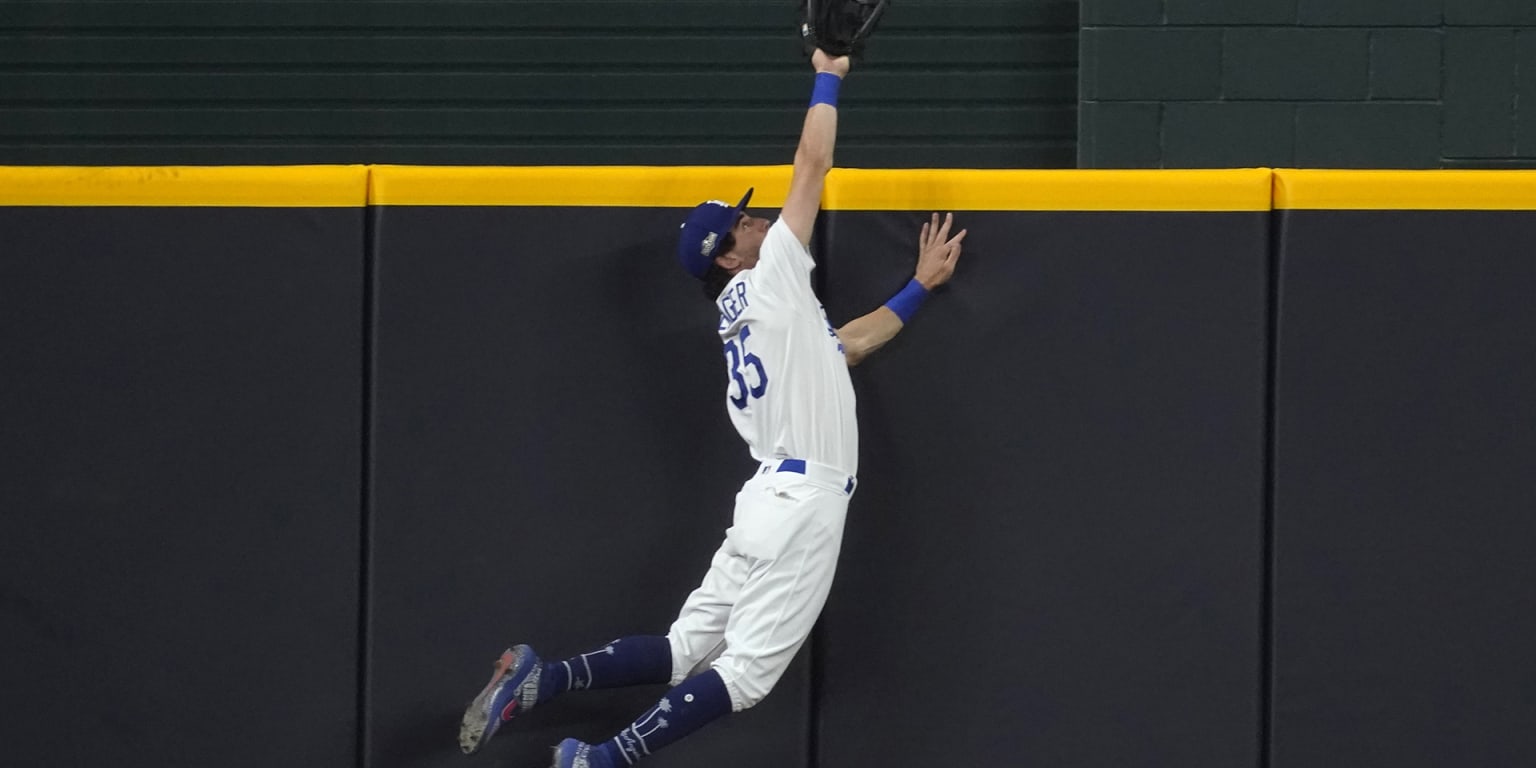 The Dodgers countered Manny Machado’s epic bat flip with an epic glove flip.
Cody Bellinger made a sensational leaping catch at the center-field wall at Globe Life Field to rob Fernando Tatis Jr. of a potential go-ahead home run in the seventh inning of the Dodgers’ 6-5 win over the

made a sensational leaping catch at the center-field wall at Globe Life Field to rob Fernando Tatis Jr. of a potential go-ahead home run in the seventh inning of the Dodgers’ 6-5 win over the Padres in Game 2 of the National League Division Series on Wednesday night. That incredible grab prompted reliever Brusdar Graterol to throw his glove and hat in celebration.

“Great players make great plays in big moments, and Cody did just that,” Dodgers manager Dave Roberts said. “Man, I just don’t know many guys that can make that play. He got turned around a little bit, but he still recovered his length and his ability to jump and control his body. It was a game-changing play.”

With a runner on and two outs in the seventh, Tatis drove a first-pitch, 99 mph sinker from Graterol deep to center field, but Bellinger sprinted back to the wall and made a perfectly timed jump to snag the ball, preserving the Dodgers’ 4-3 lead. Bellinger covered a total of 97 feet on the inning-ending play, according to Statcast.

“I knew he hit it, so it was either, ‘That’s gone off the black screen,’ or, ‘I’m going to get to the wall and maybe have a chance to catch it,’” Bellinger said. “I just kind of turned around as fast as I could, got to the fence and saw that it was robbable, so I decided to try to time up the jump. That’s how it worked out.”

Tatis is viewed as a contender for the NL MVP Award this year, but Bellinger — the reigning winner — shone brightest on Wednesday. In addition to his defensive heroics, Bellinger crushed a 433-foot solo home run to center field off San Diego right-hander Zach Davies in the fourth inning, no easy feat considering the cavernous dimensions at Globe Life Field.

The 25-year-old slugger became the first player to hit a homer and rob a homer in a postseason game since the Cardinals’ Allen Craig in Game 7 of the 2011 World Series. Bellinger relished his homer, noting that he hadn’t even hit a ball out to center field during batting practice this week, but he felt robbing Tatis trumped his work at the plate.

“Man, in that situation, that was cool,” Bellinger said. “People have asked me if I’d rather hit a home run or rob a home run in those circumstances. I think, in that circumstance, robbing the home run felt pretty good.”

“You’ve got to tip your cap sometimes,” Hosmer said. “It stinks you’ve got to do that. Cody made a heck of a play out there in center field. It’s a shame there wasn’t 50,000 people in the stands that were able to see that catch. That’s just the way the game goes sometimes. It’s a game of inches, and we were on the wrong side of it tonight.”

Other Padres weren’t as appreciative of the moment, though. Graterol’s exaltation of Bellinger’s effort irked Machado, who barked at the hard-throwing rookie as he walked off the mound. Graterol responded by blowing a kiss at Machado, fueling tension between the opposing dugouts. Bellinger said he didn’t get a good view of the skirmish, but he threw his support behind his teammate.

Bellinger struggled to find his MVP form during the regular season, but Roberts said he thought it spoke to Bellinger’s character that he has set his offensive woes aside and turned the page in the postseason.

Man of the hour!@Cody_Bellinger joins @Ken_Rosenthal after homering and making a crazy catch in the @Dodgers win! pic.twitter.com/OmpymANSn9

“I think that’s what you’re seeing,” Roberts said. “I just love his clarity and his compete. You mentioned kind of struggling through hitting, but right now, I really think his swing is as good as it’s been, even on the ball down below that he hit the home run off Davies tonight. He’s just fighting, and he’s playing every pitch defensively. That’s what an MVP should do, and that’s what he’s doing.”

Maria Guardado covers the Giants for MLB.com. She previously covered the Angels from 2017-18. Follow her on Twitter.