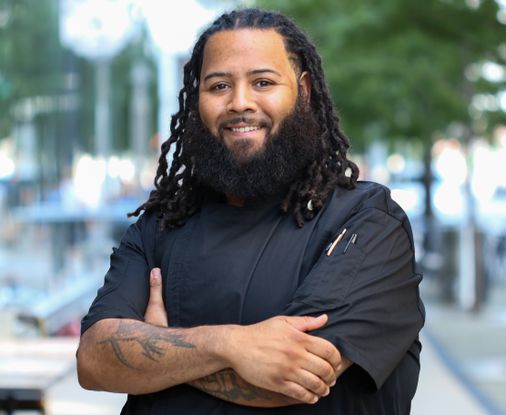 Yahya Noor from East Boston’s Tawakal Halal Café has seven kids — four of whom started virtual class last week — so he knows what he’s talking about.

“Think about it like going to school all day, where you don’t have the option to just go to the cafeteria,” he says. Instead, he packs Tupperware containers of lunches and snacks the night before for easy distribution at set times so his kids don’t get distracted. A favorite? Basmati rice with wild-caught salmon from Market Basket (his go-to grocery store), mozzarella cheese sticks, and grapes.

Get creative at breakfast

If your kid eats on the fly, use breakfast as the main meal. Valentine Howell from Krasi in the Back Bay has an 11-year-old daughter with an “eclectic” palate and a remote curriculum in Roslindale. He fashions breakfast “sushi” with a banana rolled in Greek yogurt or peanut butter, then rolled again in her favorite cereal (she likes Fruity Pebbles; your mileage may vary). He then slices it into bite-sized pieces. “It looks like fun kid’s sushi, it gets them to eat yogurt, and they often want to make it themselves,” he says.

Heather Costa from Back Bay’s Revolution Health Kitchen stocks up on organic products at Aldi. “Salsa, spices, pastas — they have a ton of organic products that are so much cheaper,” she says. (One favorite: Kite Hill vegan cream cheese.) She stores food for her remote Somerville third-grader in a Kitsure 30-ounce stainless steel Thermos, which is larger than other brands and comes with a folding spoon.

Tom Fosnot from Lincoln’s Real has three kids enrolled in remote learning. His secret? Cooking a big batch of rice on the weekend and using at as a base for the week’s lunches, from tortilla wraps to salads topped with chickpeas, veggies, pre-cooked chicken or turkey, and crumbled cheese to avocado sushi rolls. He also stocks up on rice ramen from Lotus Foods and lets his kids top it with whatever they like — usually frozen peas or broccoli. “Sandwiches and bars are fine, but they want something substantial and fast,” he says.

Stick to what you know

Charlie Foster cooks a wide variety of Mexican food at Concord’s Adelita, inspired by his wife, Zaira, who’s from Mexico. But his 11-year-old daughter, Sophie, knows what she likes: refried beans smeared on Portuguese rolls from Costco, every day. “Variety is not the spice of life,” he jokes. To help her branch out, he enrolled Sophie in an online baking class through Paradise Island Kids, a Westborough-based enrichment center with Zoom programs — a way to broader her horizons and help out with cooking.

Cook more than you need

Paul Turano from Cook in Needham and Newton has two tweens who are part of Canton’s remote program — and a spouse whom he has reined in from wandering supermarket aisles in search of lunch. His advice is simple: “Don’t go shopping aimlessly, and plan a few leftover meals.” Spaghetti and meatballs for dinner? Try a meatball sub for lunch. Even better advice in an era when we’re trying to avoid the supermarket.

Jo Megwa from the Back Bay’s Piattini sent her teenage daughter to in-person high school in Norwell, but she came home sad about the new environment. “She was dying to get out of the house and be with her friends, but she said lunch was the worst: very sterile, six feet apart. It was depressing,” Megwa says. For a colorful boost, Megwa started serving colorful snacks on skewers (she likes the $6.99 Brandon-super 200-count brand). She uses tomatoes, peppers, pre-sliced cheese cubes, and olives, which are bright and easy to pack the night before. She also packs a “just in case” bag filled with napkins, salt, pepper, and the most important ingredient of all — hand sanitizer.