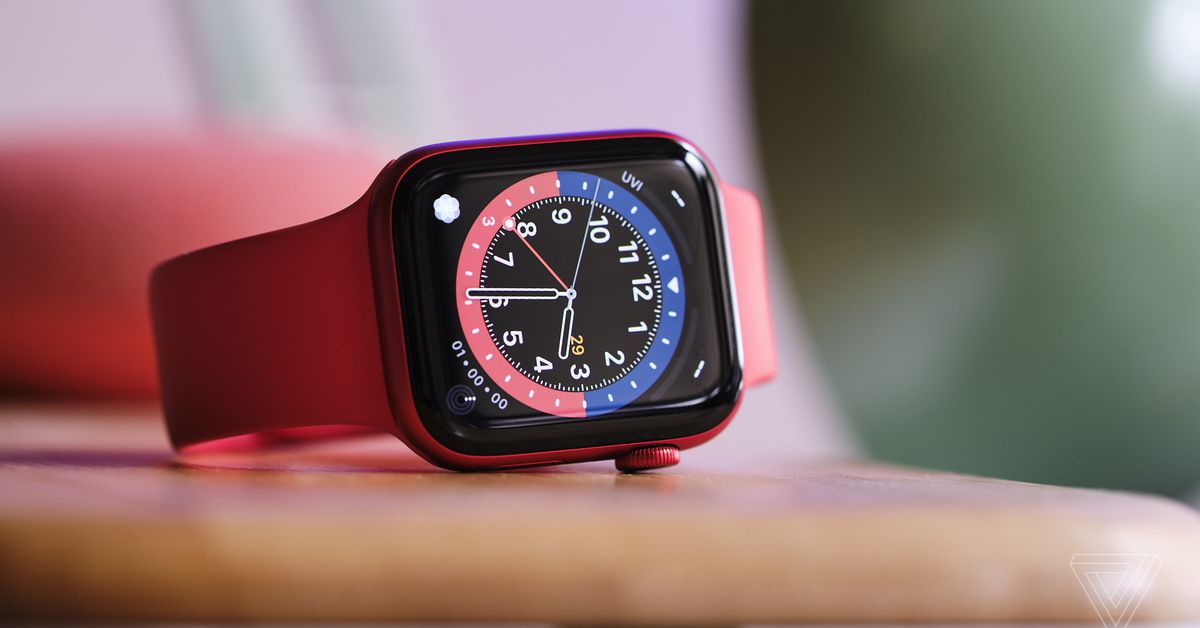 Starting at $399, it’s not the best deal you can find for your wrist, but it justifies its cost by offering a ton of value — just not enough value compared to previous generations that you’d notice it. It’s an iterative update, in other words. 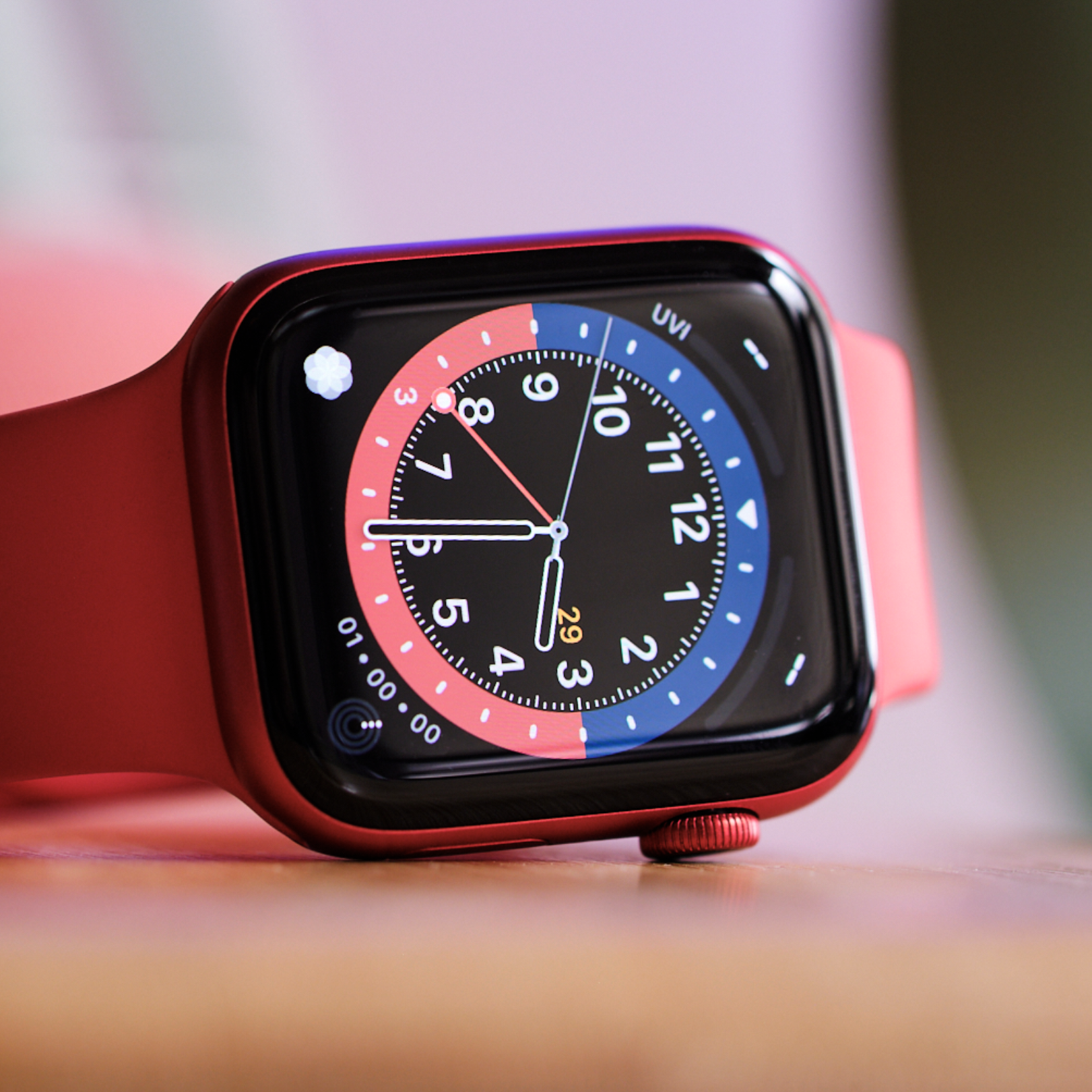 Other than the fact that there are new color options like red and blue, it’s virtually impossible to distinguish the Series 6 from its predecessor. The only tell is that the sensor array on the bottom is different to accommodate the blood oxygen sensor on the newer watch. It’s still a lozenge-shaped square with a big, beautiful screen and it still offers an array of finishes in two sizes, 44mm and 40mm.

The Series 6 has slightly faster charging — in my tests it was charging from zero to 100 percent in a little over two hours, while the Series 5 hit 80 percent. That’s a fairly minor bump, but it is marginally useful since more people will be looking to charge it at in-between times so they can take advantage of the new sleep tracking features in watchOS 7.

The Series 6 is physically indistinguishable from the last generation

There’s a new processor inside the Series 6, but that hasn’t affected my experience at all — battery life and speed both appear to be identical to last year’s model. That means I’m getting about a day and a half (including sleep) on a single charge, but less if I use it for exercise tracking.

The always-on standby screen is brighter than on the Series 5, but I never really had a huge problem with brightness on the older model. Finally, there’s an always-on altimeter and the aforementioned blood oxygen sensor.

Add all those iterations up and I believe that if you have a Series 5 or Series 4, there’s not a compelling reason to upgrade. This many generations in, it’s clear that the upgrade cycle for the Apple Watch ought to be closer to three or five years for most people.

If it is time for you to get an Apple Watch — either your first one or as an upgrade — a harder question for me to answer is which one to get. There’s the Series 6 and there’s also the new Apple Watch SE, which lacks an always-on screen but otherwise supports the vast majority of things most people want out of a smartwatch. The low-cost Series 3 is still sticking around, and heck, if you can find a refurbished Series 5 or 4 I think either of those would be a good buy.

Trying to parse the differences between the different Apple Watch models is about as difficult as trying to distinguish the dozens of slightly different phones Samsung makes. Instead of offering clear choices based on features, Apple is flooding the zone with an option at every conceivable price point from $200 on up to well over a thousand bucks.

My honest advice is to spend as much as you’re comfortable with, and don’t sweat that you’re missing something vital by ignoring the upsell. Because the truth is that the things that make the Apple Watch Series 6 great are shared by all those other Apple Watches.

If you haven’t looked into the third-party app ecosystem for the Apple Watch in awhile, I bring you good news: it’s great now. There are third-party apps for many of the things I want on my watch, including bike ride tracking, trail maps, Google Maps, and more detailed weather apps.

I don’t usually get to these apps via the Apple Watch’s app list, though, I usually launch them via watch face complications. Apps can now put more than one on a single watch face, which offers just a bit more customization. I still can’t find a single watch face I like to use all the time, but the new options do make it easier for me to set activity-based faces to switch between. I have a work face, a weekend face, a biking face, and a cooking face.

The watch face I use for cooking, Count Up, is nice because it has a built-in stopwatch in addition to the main stopwatch app. Of course, it’s only necessary because Siri still can’t set multiple timers.

The Apple Watch now does native sleep tracking, but I might end up sticking with a third-party app for that. Apple’s system is built in, but it pushes you into using Apple’s wind-down bedtime feature. I find its bedtime reminders restrictive and sometimes even patronizing — it’s worse than my parents were when I was eight and stayed up too late reading with a flashlight. Anyway, watchOS 7’s sleep tracking reports are also less detailed than what you can get from a third-party app or even from another smartwatch like the Withings HR.

Later this year, Apple will release its Fitness Plus service that integrates with the Apple Watch by displaying your health stats on top of workout videos. I wasn’t able to test that, but I’ll be interested to give it a try when it releases. I did use Apple’s new biking directions fairly extensively and found them really helpful — but I’m also lucky enough to live in an area where they’re available.

The most intriguing new feature in watchOS 7 is Family Setup, which lets you set up a cellular Apple Watch for a kid or parent as a managed device. My colleague Dan Seifert has been testing it and will have much more to say about it in another review. Here, I’ll just note that Dan tells me that unless you spend a lot of time configuring stuff as a parent, you’re effectively handing a full Apple Watch with all its features and complexities to a child, which seems like a lot to me.

And I know it’s about as effective as howling at the moon, but I do wish Apple would find a way to make the Apple Watch available for Android users — even if it’s only by making it even more independently useful.

I have been covering gadgets for a very long time now and in that time I’ve built up a strong aversion to gimmicky health gadgets. Every time I go to the Consumer Electronics Show I am beset with small companies making vague claims that their wellness devices will do something vital for my health — and those claims wilt under the slightest inquiry about scientific rigor, academic studies, or FDA clearances.

I’ve never associated the Apple Watch with those digital snake oil gadgets because Apple has historically been responsible about its claims and features. For the blood oxygen monitor, Apple is not making any specious claims. But because the results it provides require so much context and are unclear so often, I trust this blood oxygen monitor way less than I trust the other sensors on the watch.

The system works in one of two ways. First, you can measure your blood oxygen manually. To do so, you need to rest your arm on a horizontal surface for 15 seconds while it takes a reading. More importantly, though, you have to make sure the watch is quite snug and correctly placed on your wrist. It needs to be positioned a ways up your arm — quite a bit higher than how I usually wear a watch.

If you don’t follow the instructions exactly, you likely won’t get a reading. And when you do, the results are still inconsistent.

If you follow the directions to a T, you’ll usually get a reading. Sometimes you won’t, though, and for me that happened much more often than I was expecting. A blood oxygen level over 95 percent is generally considered okay and anything under that may be a sign of a problem. Generally, when I tested the Apple Watch against a finger monitor, the finger monitor gave me a higher reading.

The other way the monitor works is that it tries to read your blood oxygen in the background while you are going about your day or sleeping. Here, I often got numbers that were lower than I expected — I think often because the watch wasn’t positioned correctly for an accurate reading.

Other reviewers have run into similar issues. Joanna Stern at the Wall Street Journal and Geoffrey Fowler at the Washington Post both reported unreliable results. In a statement to the WSJ, Apple says:

“The Blood Oxygen feature has been rigorously tested across a wide spectrum of users and across all skin tones. For a small percentage of users, various factors may make it difficult to get a blood oxygen measurement including motion, watch placement on the wrist, skin temperature and skin perfusion.”

Apple also says that this blood oxygen monitor is a “wellness” feature, that it’s not meant for medical diagnostics, and that it isn’t seeking any sort of FDA clearance for it. It won’t be used to send you alerts of troubling results like the heart rate monitor can.

And to be ultra clear: this is not a COVID-19 detector or early warning system. Apple is taking part in studies to see if the sensors on wearables can do something to help with early detection, but those results won’t come in for some time.

Several other smartwatches have blood oxygen monitors, and it may be that trying to measure blood oxygen from your wrist is just inherently problematic. Nicole Wetsman just reviewed the Withings Scanwatch and found its results to be consistently wrong. (Withings is awaiting a sign-off from the FDA before it distributes it in the US.)

I’m just not sure who Apple intends to use this feature. If you happen to be a high-altitude endurance runner who’s super into quantified self statistics, I think you’ll find a use for it. If you’re not that person, I am not sure that you’ll get anything useful from this sensor.

It has very good fitness and health tracking, and Apple’s Health app keeps that information secure and private unless you purposefully share it. It integrates so well with the iPhone that it puts other smartwatches at a disadvantage — but that still means it has great support for iMessage, phone calls, Apple Music, and the rest. And for simple, basic smartwatch features like notifications and useful watch faces, watchOS 7 is second to none.

A small upgrade, but still the best smartwatch

I can’t help but think that putting the Apple Watch into a yearly release cadence may not be strictly necessary anymore. Apple may keep making these small updates, but that doesn’t mean you need to keep up with them. If you have an older Apple Watch that’s still serving you in good stead, keep using it.