With its spectacular 130-foot-tall bridge over the Des Moines River, the High Trestle Trail draws more than 250,000 annual visitors from Iowa and beyond. Now Ankeny, at the other end of the 25-mile biking and pedestrian trail, wants to make its section just as memorable.

A proposal submitted to the Ankeny City Council calls for a host of improvements to the already popular byway, which runs 4.1 miles from its eastern trailhead through one of Iowa’s fastest-growing cities.

The plan includes temporary and permanent art installations at points along the trail. Included are 6- to 8-foot-tall sculptures of Iowa prairie animals, pocket parks, colorfully decorated under- and overpasses and a 15-foot-high trestle bridge sculpture under which the trail would pass.

The elaborate proposal document also envisions new signage that would make it easier for trail users to find their way. 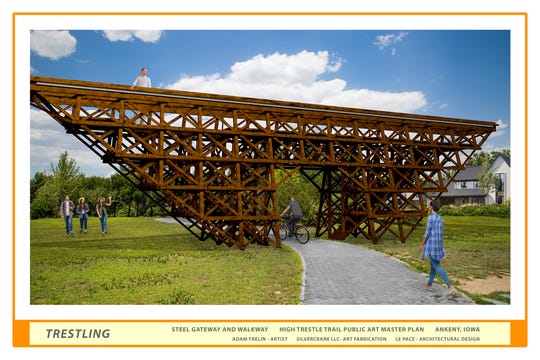 Sculptor Adam Frelin based this trestle off the historical design of the bridge trestle from the Boone River valley. The sculpture would stand at 15 feet high and would include a vantage point for pedestrians. (Photo: Adam Frelin)

The proposal is the product of work by city staff, a consulting team and a steering committee of Ankeny cultural leaders, business owners and residents. It notes that in surveys conducted about the trail, nonresidents saw Ankeny as “insular, plain, cookie-cutter” and so on.

“But, they still visit for the High Trestle Trail,” it says. “Nearly everyone surveyed uses and enjoys the trail system, though not all associate the High Trestle Trail with Ankeny. In the absence of a strong identity and with a growing, enthusiastic citizenry, there is opportunity to embrace Ankeny’s safe, clean family-friendly traits and create trail experiences that help the community build an intentional and welcoming future as it continues to grow.”

The proposal, which calls for tackling the improvements a project at a time, awaits approval and funding. But it is getting an enthusiastic reception from some Ankeny businesses and residents.

Firetrucker Brewery, located near where the trail crosses Southwest Third Street in the city’s Uptown district, serves customers from all over the country who come to bike the High Trestle Trail, said co-owner Scott Kaven. 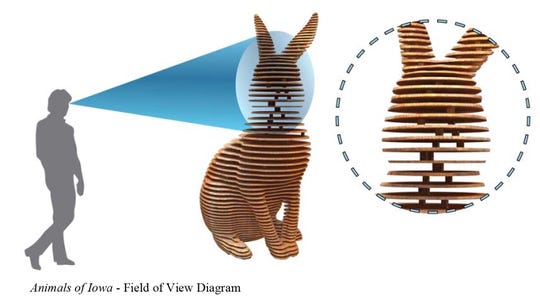 “Animals of Iowa,” created by artist Brandon Vickerd, is one of dozens of projects mentioned in the High Trestle Trail Master Art Plan. Vickerd designed these prairie animals made of steel, which would be placed in spots next to the trail. (Photo: Brandon Vickerd)

“Ankeny is really cool, and the High Trestle Trail is awesome, but we need something like this to also compliment it,” Kaven said. “Art is great. … It’s another visual aspect that everyone needs, and this is definitely putting Ankeny on the map.”

Since the brewery opened in 2014, Kaven and fellow co-owner Neil Zaugg said they have seen shops, bars and restaurants popping up to serve the people the trail draws, especially in Uptown.

“The whole game of Uptown has been changing for the better. We see it every year, and we’re happy and proud to be a part of that change,” Zaugg said.

Porch Light Coffeehouse in Uptown opened in 2017. Owner Joel Cox, who was surveyed in connection with the plan, said he hopes the changes will redefine Ankeny’s portion of the trail as “iconic.”

“I think I speak for all business owners up here when I say we’re thankful for the attention the city is giving this part of town,” he said. “It’s great to see some focus put into the area where Ankeny was founded on.”

“Drop In,” created by Guggenheim fellow Matthew Mazzotta, would be built at the Irvinedale trail head. According to the master plan, the front porch will have an accessible ramp and contain a unisex restroom along with other planned trail amenities. (Photo: Matthew Mazzotta)

Carin Murphy, president of the Ankeny-based Lake Country Cyclists group, said she believes the trail already has plenty of foot traffic but would benefit from more amenities.

“I think that would be great, because that will make the city of Ankeny look nicer and more friendly,” Murphy said.

She and other club members were among more than 1,000 stakeholders who contributed to the plan, with an additional 267 residents participating in a virtual open house. A city parks and facilities comprehensive plan survey showed that 61% of Ankeny residents named walking and biking trails — more than any other amenity — as a priority.

The proposal says some of the core needs along the trail include play areas for kids, water fountains, restrooms, a bike repair station, places to sit and lighting for early and late users.

Then there are several dozen of what Lord refers to as “experiences,” defined as strategically placed amenities. Those range from parking pads for food trucks to whimsical touches, such as a circular “detour” with musical notes activated by bikers and pedestrians riding across colorful strips on the pavement. 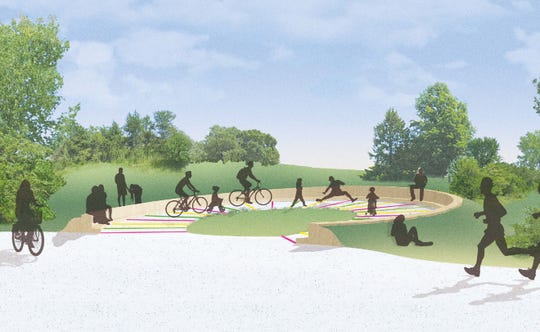 According to the master plan, the Daily Tous les Jours studio created “Detour,” a 40-foot diameter banked wheel of fun and music. As cyclists take a spin or pedestrians circle this detour from a straight path, a melody is played for everyone to enjoy, with accompanying lights. (Photo: Daily Tous les Jour)

Projects and installations in the proposal range in cost from $1,350 to $470,000. The plan lists multiple avenues for funding, including donations, grants and developers, along with a portion of the city’s budget and funds from hotel/motel tax dollars. That’s expected to amount to about $2 million for the 2021-2022 fiscal year.

The project already has secured a $50,000 Bravo grant through Bravo Greater Des Moines, which provides support annually for local government partners to carry out public art projects. Lord said the grant will be used to fund the first, yet-unidentified project, which will be presented to the City Council for approval this fall. If all goes well, he said, it would be completed in the spring.

Existing construction along the trail will continue, with a new underpass opening this fall. The extension runs south from South Ankeny Boulevard to Magazine Road.

“Obviously, budget constraints are real,” Lord said. “A lot of our public partners who oftentimes help fund projects like this have been negatively impacted by the pandemic. So it’s going to take time. … If the council chooses to, we can chip away at it over time.”

Jay Byers, CEO of the Greater Des Moines Partnership, said public art along the trail could be a wise investment for the rising suburb as it seeks to establish its identity.

“Public art leads to vibrancy in our community, enhances quality of life and makes our region a more attractive place for people to live and work,” Byers said.

Melody Mercado covers the eastern Des Moines metro for the Register. Reach her at [email protected] or Twitter @melodymercadotv.