ANGI Homeservices (ANGI) is the largest digital marketplace for home services. Although its performance has lagged expectations in recent years, we believe the recent initiatives taken in combination with ongoing catalysts could provide ANGI with a significant opportunity to capture the home services market.

ANGI began as Angie’s List in 1997 as a website to review services providers. In late 2017, it was acquired by IAC (NASDAQ:IAC) (media holding company) and merged with Home Advisor to create ANGI Home Services. It also includes several smaller companies including Handy which it acquired in late 2018. ANGI enables homeowners to connect with contractors/handymen to perform the jobs needed. ANGI currently has about 200,000 service providers (SPs) and 15mm households on its platform.

To put this in perspective, there are about 120 mm households and about two million SPs in the United States. The TAM of the household services is half a trillion dollars with the capacity to be significantly larger if certain frictions are removed. IAC believes reducing frictional costs would double this number, which would increase the TAM to 800B. This increase in TAM generally holds true with platforms when the convenience of a task is improved significantly. Currently, ANGI users only use the platform for about 1.8 jobs per household/year which leaves ANGI with a significant runway.

ANGI is trying to remove the frictions that come with home services. Normally, this is quite a pain. One first has to find a service provider (hard to do in some areas) and get bids from at least two SPs to make sure the pricing is reasonable before starting the job. Currently, the search process is done primarily through word of mouth or through Google/Facebook searches. The SP still has to come to your house and assess the extent of the job.

After these steps are taken, the job is then scheduled. ANGI makes this job less of a hassle with their platform. One puts the description of the job on the platform and ANGI connects you to the most suitable SPs (based on reviews, background checks, etc.). The SPs then speak with you regarding the job and make an appointment. Currently, ANGI makes money in three ways: They take a cut of the transactions done using their marketplace (about 10%), SPs pay them $30 per lead generated with their platform, and they also make money through SP advertising on Angie’s List.

The keys to a successful platform are that it has to be significantly more convenient than the status quo and it has to be used frequently by both the supply side and the demand side of the marketplace (enables habit formation). Although ANGI has made finding SPs easier and safer, it is not that significant and ANGI would not be a compelling case. However, the data ANGI has collected over millions of transactions has given it an opportunity to enable something wonderfully innovative, fixed prices. Fixed prices are jobs that with the click of a button, can be purchased and scheduled. No more searching for the right SP and haggling for prices. When it comes to platforms, minor tweaks can unleash the full potential of the platform. We believe that fixed price could be the tweak needed due to the following reasons:

As the CEO said, “Fixed-price services are an atomic building block of being able to deliver this sort of higher value function.” ANGI initiated fixed prices in 2017 (along with acquiring Handy in late 2018). They have been working to roll it out onto their platform and have recently gotten 200 out of their 600 jobs to be fixed price. CEO Brandon Ridenour believes that almost 70% of their jobs can be turned into fixed price with a TAM of about 200B. There is still work to be done as the job prices are still on a national level with pricing granularity needed to be done at the zip code level to be accurate. Here is a snippet from their investor presentation on the benefits of the fixed price model. 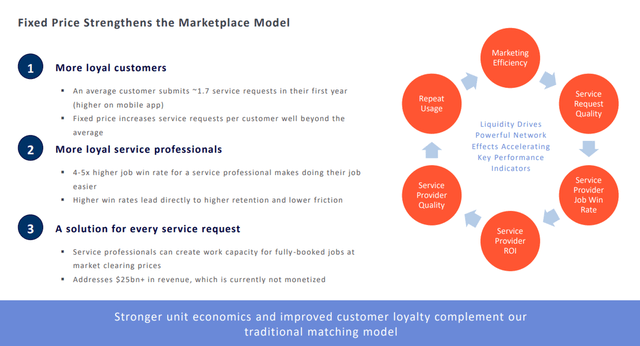 A large problem for ANGI has been SP capacity not being able to keep up with demand. ANGI only has about 10% of the total number of SPs in the United States on its platform. While marketplace requests have grown at greater than 20% CAGR, SP growth has been less than 10%. As a result, about 40% of the service requests go unfilled on their platform! The most likely reason is that SPs are not incented enough to join ANGI as the status quo is good enough for them. Word of mouth and Google search results give them enough work to make a living.

For service providers to want to list their service on ANGI they have to be incented in a way that is more profitable or significantly more convenient for them. Fixed prices provide significantly more convenience than traditional methods with the profitability being roughly the same once factoring in the time spent chasing leads and traveling. Although entrenched SPs that have already built their own network will likely not join the platform, newcomers and other SPs that do not have this network will join if the demand is there.

COVID has been a tailwind to the home services industry. In April 2020, more SPs joined the platform than in the entire history of the company. What is curious is that ANGI is seeing growth from their demand side of the network while SPs that rely on word of mouth and Google search are seeing reduced demand. Management believed this is due to people seeking more digital solutions. Pandemic times have also catalyzed ANGI to roll out a payment solution on their platform making the transaction between the SP and the customer more seamless.

ANGI’s partnerships with Nextdoor (NDOOR) (neighbor sharing app), Lowe’s (NYSE:LOW), and Realogy (NYSE:RLGY) will help grow both their customer and SP networks. Partnerships such as these will help build out ANGI’s network.

IAC is a majority shareholder owning about 84% of ANGI. These are intelligent capital allocators that have managed to beat the SPY by several percentage points over the last twenty years. They specialize in media companies ranging from Match Group (NASDAQ:MTCH) to Care.com (NYSE:CRCM) and have been responsible for their success. They recently spun Match off this year, which was the lion’s share of their holdings. As a result, ANGI has a much more focused management team at its helm.

Fixed Price services may not provide the growth that ANGI needs to get the flywheel starting. This is primarily the biggest risk as it would be hard to see another lever ANGI could pull to incent SPs to join their network.

The lack of SP supply will keep the platform from snowballing and will instead grow at sub 15% rates.

Valuing ANGI is a bit of an artistic exercise as it is a platform and is going after an enormous market. It does not have too much downside as it is a steadily growing business (15% CAGR), profitable, solvent, and run by a very capable management team (IAC). If it sticks with its current trajectory, it will most likely hover around its current valuation. However, if fixed prices catch momentum and incents both supply and demand side parties to their marketplace, ANGI has serious multibagger potential. The platform is already profitable and if successful in dominating the home services market, ANGI would be well worth over 10x its current valuation given the long runway and lack of competition. To compete with ANGI, one would first need the scale (drive frequency) along with vast amounts of unique data sets on hundreds of jobs, both of these would take a long time to replicate.

Ridenour had an interesting point in his IAC shareholder letter, it was that investing is well understood for nascent companies with a large TAM, however in more advanced businesses, the TAM is no longer factored in the valuation but instead is replaced with the prior years’ performance of the company. We believe ANGI could be one of the most dominant platforms in the next ten years if it can execute. Although we are bullish on the name, we also recognize that the market has written ANGI off and thus time is on our side. Waiting until we are more certain of the success of ANGI’s initiatives is more prudent and although we give up some upside, there will be plenty more if it is successful.

Disclosure: I am/we are long ANGI. I wrote this article myself, and it expresses my own opinions. I am not receiving compensation for it. I have no business relationship with any company whose stock is mentioned in this article.