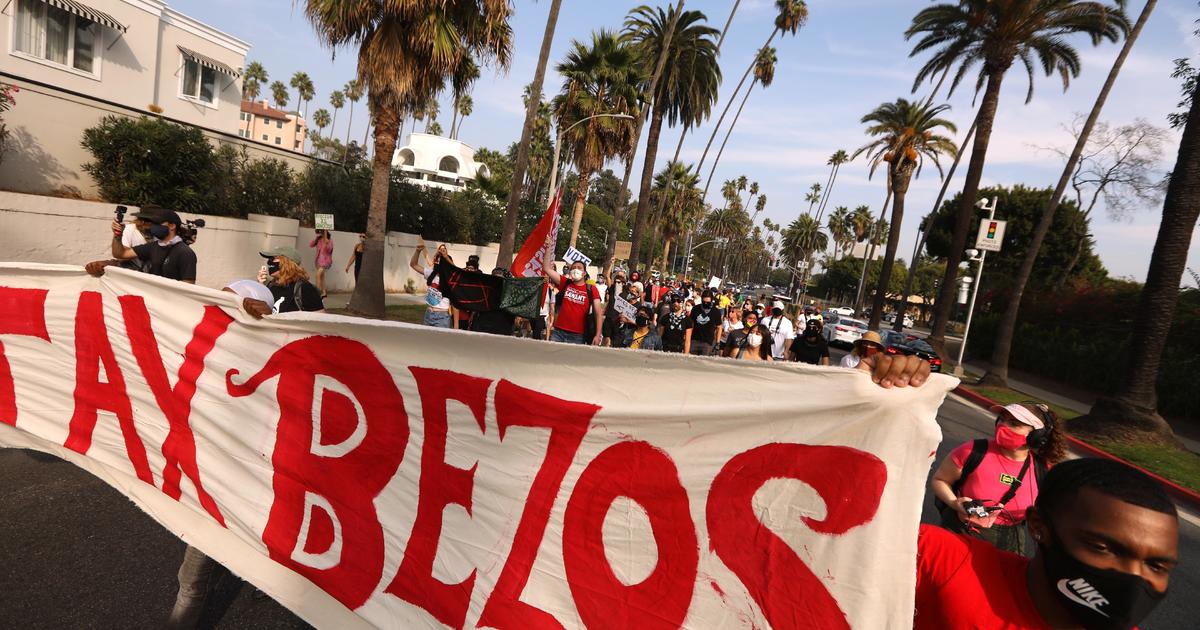 Nearly a hundred protesters marched on Sunday, according to organizers of the rally. Former and current Amazon workers were joined by groups including United Teachers Los Angeles, Sunrise LA and Extinction Rebellion, which lobbies for action to combat climate change.

“The richest man in the world made $88 billion in the course of the pandemic. It’s time to fight back,” Chris Smalls, one of the protest’s leaders, told CBS MoneyWatch.

Smalls worked at an Amazon warehouse in New York City until March, when he organized a walkout and was fired shortly thereafter.

Protesters issued a series of demands, including that the e-commerce giant boost worker pay by $2 per hour, provide more personal protective equipment and overhaul how the company does business. They are also urging consumers to boycott Amazon’s Prime Day event, which is set to take place October 13-14 this year.

It was the latest in a series of protests near Bezos’ many residences. Protesters in August gathered outside the Amazon chief’s Manhattan mansion and later that month protested at his Washington, D.C. residence.

“COVID has exposed a lot about this country,” Smalls said. “This country’s in shambles right now. Everybody’s losing their jobs, small businesses are being closed because of Amazon, people’s lives are being destroyed.”

Bezos’ personal fortune has increased $70 billion this year, according to the Bloomberg Billionaire Index, as masses of American consumers moved to online shopping while sheltering at home. The company is set to double its warehouse footprint this year, as well as expand its workforce by nearly 300,000 across its warehouse and corporate divisions.

Despite Amazon’s growth during the pandemic, employees have accused it of ignoring their safety concerns, lacking transparency about the extent of coronavirus infections at its facilities and barring workers with health problems from working at home. The company briefly raised workers’ hourly pay and expanded its time-off policy at the outset of the coronavirus outbreak in the U.S., but rolled back both policies this summer.

Last week, Amazon revealed that nearly 20,000 of its workers had contracted COVID-19. That’s lower than the positivity rate in the U.S. at large, the company said.

Amazon did not immediately respond to a request for comment. The company has previously said that its baseline worker pay, which starts at $17 an hour, is superior to that offered by other retailers.