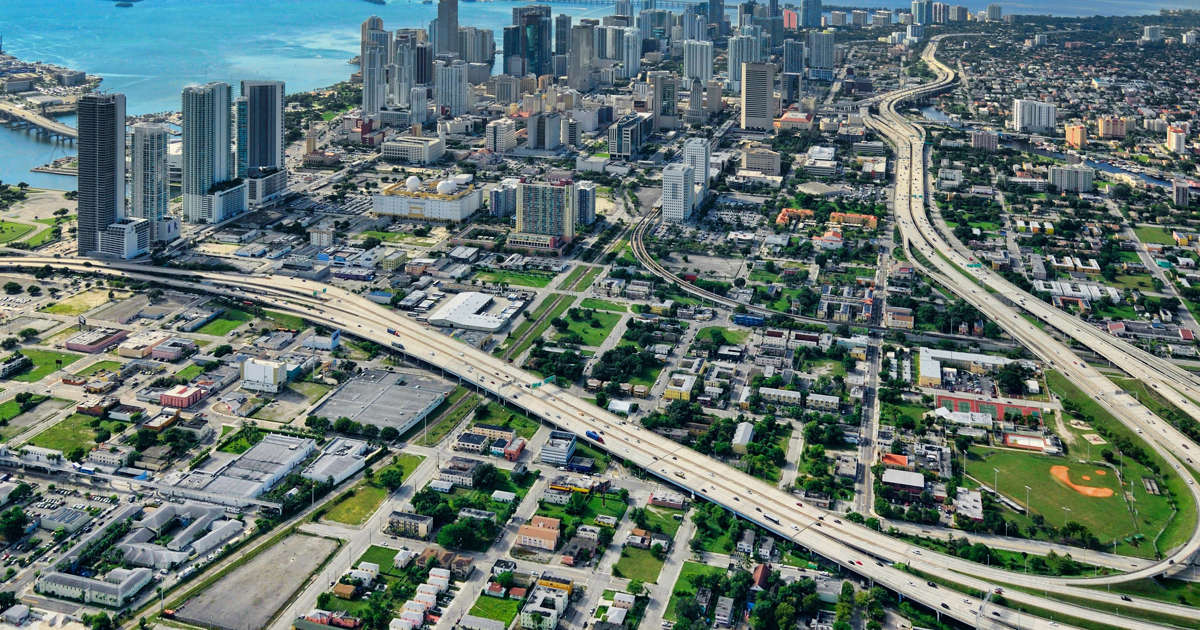 Porfirio Mercado, a Hialeah resident, left Nicaragua in 1983 to escape the socialist government of Daniel Ortega and the Sandinista National Liberation Front. The 53-year-old has lived in Florida ever since. In November, he plans to cast a vote for former Vice President Joe Biden.

“Trump brings back a lot of memories,” said Mercado, whose father was a political prisoner for 10 years. “I know he [Trump] says it as if he is joking, but he would like to stay in power forever. That reminds me of the dictators we had in Nicaragua, from [Anastasio] Somoza to Daniel Ortega.”

Dina Díaz, 44, left Nicaragua in 2007 after Ortega came back to power. She did not want her children to live through the “terrible” she experienced in the 1980s. But, unlike Mercado, she plans to vote for President Donald Trump. Díaz says she believes that he is effective against regimes in the region.

“I have lived firsthand everything that has to do with socialism, communism” said Díaz. “In Trump, we see a person who supports the Nicaraguan people, who are suffering now under the dictatorship of Daniel Ortega.”

Voters like Mercado and Díaz belong to the non-Cuban Hispanic demographic in Florida, which makes up roughly 70% of eligible Latino voters in Florida, according to Census data from 2018. They have roots in Nicaragua and across Latin America. They are also part of Florida’s crucial independent swing voters, because many Nicaraguans and others in the Hispanic and Latino population do not identify with either Republicans or Democrats.

According to experts, a shift in voter support in a Latino community such as Nicaraguans, who are 3.4% of the state’s eligible Latino electorate as per the 2018 American Community Survey, could be meaningful to the outcome in the presidential election. Fernand Amandi, president of Bendixen & Amandi, a Miami-based political research and advisory company specializing in the Hispanic vote and a Democratic strategist, estimates there are 60,000 to 70,000 registered Nicaraguan voters in Miami. Both the Biden and Trump campaigns are trying to woo them and other non-Cuban Hispanic groups, in what will most likely be yet another contested presidential election in Florida.

The Herald spoke with Nicaraguan voters from across Miami-Dade about their concerns in the coming election. Like other Latino voters, they cited healthcare and the coronavirus, plus the economy, among concerns of the Nicaraguan community.

But Nicaraguans also are sharply focused on U.S policy toward Nicaragua, as Ortega has grown increasingly repressive and authoritarian. Over 100,000 Nicaraguans have fled the country since 2018, according to the United Nations.

Historically the Nicaraguan-American community in South Florida has voted conservatively, leaning Republican from the late 1980s to 2004, said Amandi.

But exit polling from the group conducted in Florida in the 2012 election indicated that 72% of Nicaraguans voted for President Barack Obama. In 2016, Amandi said an analysis of electoral precincts in Miami-Dade County showed an “ample majority” of the Nicaraguan community supported Hillary Clinton.

Amandi attributes this shift in support in part to Democratic initiatives such as Obamacare as well as what he called the Republican Party’s “discriminatory campaign against immigrants and the Hispanic community,” which “has resonated negatively with Nicaraguans.”

However, Eduardo Gamarra, who directs the Latino Public Opinion Forum at Florida International University, said that based on polling conducted among Central Americans, he believes that more Nicaraguans support Trump today than in 2016. It’s a trend that runs parallel to that seen in Cubans and Cuban-Americans, he noted, who supported Barack Obama in 2012 in record numbers, but in 2020, favor President Trump. In focus groups of Nicaraguans, especially after Ortega’s 2018 crackdown, Gamarra also noted more support for the American president than before.

Gamarra said the reversal observed in part of the Nicaraguan community, from the Democratic Party back to the Republican Party, can be traced “to the violence and authoritarianism of Ortega’s government.”

President Trump has tried to position himself as firm leader against the Nicaraguan government and other regimes in the region, imposing sanctions on Venezuela, Cuba, and Nicaragua and publicly condemning their governments.

“The perception is that he [Trump] has been very proactive in that sense,” said Gamarra.

‘I could never vote for something that I ran away from’

Biden leads among Hispanic voters in Miami-Dade County over Trump 49% to 43%, according to a Miami Herald and Bendixen & Amandi poll conducted Oct. 1-4. Candidate preferences are stark when divided into ethnic groups. Among Cuban voters, Biden trailed behind Trump by 26 points. However, almost 61% of Non-Cuban Hispanic voters would opt for a Biden/Harris ticket, versus the 29% who said they would choose Trump.

The president has been courting Hispanics in recent campaign visits to South Florida. In late September, he hosted an event at his Doral golf resort with business owners from Nicaragua, Colombia, Puerto Rico and Honduras, describing the election as a choice “between the American Dream and chaos.”

He’s also used anti-socialism and anti-communist terms as a campaign strategy as a way to appeal to Florida Latinos beyond Cuban Americans, and worked to craft an image of himself as someone who will stand up against left-wing governments in Latin America.

“My administration stands with every citizen of Cuba and Nicaragua and Venezuela in their fight for liberty,” Trump said in a speech on Sept 23 honoring Bay of Pig veterans, while also criticizing the Obama-Biden administration for making a “weak, pathetic one-sided deal with the Castro dictatorship.” That same day, he also announced sanctions Venezuela, Nicaragua, and Cuba.

“There is a very clear difference between Biden’s weakness on Nicaragua,” said Trump campaign senior adviser Mercedes Schlapp, “and President Trump’s record of imposing tough sanctions on the Ortega, Maduro and Castro dictatorships while working to uplift all Hispanic communities here at home.”

It’s a message that has resonated with voters like Díaz, who recognizes that Nicaraguan voters have a lot in common with Cubans and Venezuelans, describing firsthand experiences with “oppressive socialism and communism” as factors influencing their vote.

“As Latinos, we hope that the Trump administration will be able to set things right against those dictatorial regimes so that our countries can have democracy,” she said.

But though she invoked a shared struggle across Latino constituencies, Díaz says that Nicaraguan issues, to her frustration, don’t feel top of mind for policymakers and political campaigns.

“Nicaragua gets shunted to the side, because all the attention goes to Cuba and Venezuela,” she said. “I agree that those countries deserve attention, but Nicaragua does, too.”

Her vote will go to Trump because she sees him as more likely than Biden to help set Nicaragua on the path to democracy, rather than just give those who have left legal status in the U.S.

Muñeca Fuentes, who is an avid Trump supporter, has lived in Miami since the 1980s. She left Nicaragua after her father sent her away from Nicaragua to keep her safe when the Sandinistas came to power.

Fuentes said she believes that the Trump administration “has done the most for Nicaraguans against the regime” of any administration, citing sanctions against Ortega’s family members and allies. However, she also sees voting Republican on the presidential ticket as her “obligation” to “keep socialism from entering.”

“This great nation took us in, opened its doors, and gave us the opportunity to live in liberty,” said Fuentes, “I could never vote for something that I ran away from.”

While she said that the Democratic Party has had some “magnificent leaders,” she said that she believed that “socialism had infiltrated and stolen the party.”

Support for Biden and Democrats

Francisco Larios, a Nicaraguan and economics professor at Miami-Dade College who has been in the United States for about 40 years, says that talking about Harris and Biden as communists is “nonsense.”

“Because deep down what happens, in my opinion, is that many Nicaraguans hate Ortega, but really they are ready to accept another dictator as long as it wasn’t Ortega,” said Larios. “There is still a tendency among some Nicaraguans to follow a strongman….But I tell my compatriots, no, if one wants democracy, one has to be consistent and not accept here what one already condemns.”

Larios, who lives in Kendall, will be supporting Biden. With other Nicaraguans, he is a member of a pro-Biden group called “Nicas Por Biden” to rally the Democratic vote among Nicaraguans in Florida and other states.

“We see a need to protect democracy in the United States. We are worried about the tone and methods and authoritarian tendencies of the current president,” said Larios.

Repudiation of the extreme left was on clear display at a “Nicaraguans with Biden” caravan in Miami in late September. The group is around 300-strong, with a few hundred more people engaged over social media. The 17-mile route included a drive into the heart of Sweetwater. Nicknamed Little Managua, Sweetwater is “home to the largest concentration of Nicaraguans and Nicaraguan Americans in the U.S.,” according to the Miami-Dade Beacon Council.

Along with signs saying “Nicaraguans with Biden” and portraits of late Supreme Court Justice Ruth Bader Ginsburg, the most common car decorations for the caravan were signs that proclaimed attendees were “100% anti-comunista.” The caravan drew a cross-section of voters: second-generation Nicaraguan-Americans who were first-time voters along with older Nicaraguan immigrants who moved to South Florida in the late ‘70s and early ‘80s as part of the wave of immigration sparked by the Sandinista National Liberation Front’s rise to power.

Ana Navarro, a prominent Nicaraguan American and Trump critic, led the caravan. She saw the mobilization of her community as a show of strength against the argument, widespread in South Florida, that votes for Democrats equal votes for socialism and communism.

“The narrative that Joe Biden is a communist is nothing but lies,” she said.

Biden has challenged Trump’s assertions of socialism in the Democratic Party. On Twitter, he criticized Trump for deporting Nicaraguan asylum seekers and doubled down on supporting democracy in Latin America. Sen. Kamala Harris, his running mate, talked with a Univision reporter about topics including the diplomatic relationship between the U.S. and Cuba and giving Venezuelans Temporary Protected Status, a temporary designation that allows people from certain countries to live and work legally in the U.S.

“In the closing weeks of a campaign cycle in Florida, Latin America policy becomes hyper local policy and political,” said Christian Ulvert, a Nicaraguan who is a senior adviser to the Biden campaign in Florida, “And the intersects really come to life in the final weeks of Florida’s elections.”

But regardless of the twists and turns in the next month of campaigning, Díaz and other Nicaraguans in Miami see voting as critically important to protect democracy.

“This time, I am in favor of President Trump, but if they are in favor of Biden let them come out,” said Díaz. “Together, we can participate in this act of democracy so that the country continues to listen to the voice of Latinos.”