Texas Rangers manager Chris Woodward joined the K&C Masterpiece on 105.3 The FAN [KRLD-FM] recently for his final chat of 2020. Here are some highlights, edited for clarity:

Having now played 30 games at Globe Life Field, how important is it for the club to develop great outfield defense? In what areas can the Rangers better use their new confines?

Chris Woodward: “Yeah, it’s really important. And we obviously emphasized that by making the moves we did. Bringing up Leody Taveras and Eli White. Nick Solak did a fine job when he was in the outfield, but when you’ve got Taveras, White and Joey Gallo in the outfield, as big as that place is … I think towards the end of the year it started playing a little smaller than it did in the beginning, but it’s a big outfield. Lot of ground to cover, and when you have those guys out there running around, it’s huge. It helps our pitching, it helps everything. That’s something we’re prioritizing moving forward.

“And on the offensive side, obviously we didn’t hit well this year, individually speaking but also as a whole. That ballpark is going to make us better hitters, and guys started to understand that about a third of the way through the season. Guys started making adjustments. In the old ballpark, you hit it high and to center or right field and you have a chance. In our new ballpark, we have to keep the ball low and have better two-strike approaches. There’s lots we need to do to utilize the ballpark in our favor.”

Jon Daniels has had lots of nice things to say about you. But were you ever concerned about results during the season and how it may affect your outlook?

Woodward: “I’m human, so you can’t help but think about it. Obviously, my job was to come in and help this organization win. We played decently at times last year … We contended for the first half and obviously couldn’t maintain that.

“This year, we didn’t play well. So, I totally understand why there would be questions. But I’m sticking true. We have made adjustments to the staff, we’re constantly looking for answers and solutions. We have some really talented, creative, smart people. We’re trying to figure this thing out and we will figure this thing out. Now… I try not to worry [about my job], but I’m aware. Because my job was to help this team win, and for fans, I was a fan back in the day so I know what it’s like. I’m going to do everything in my power, blood, sweat and tears to make this team a champion.”

Do you have a World Series prediction?

Woodward: “Interesting. I’ve got a lot of ties with the Los Angeles Dodgers, so I’m still rooting for them. They do things right. They’ve got a championship spirit there. And if they get that far, it’ll be on our field. I’ll probably be pulling for the Dodgers, so them for now.”

— Listen to the full interview here. 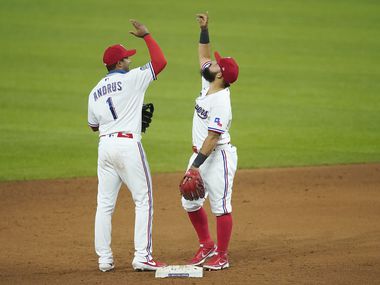