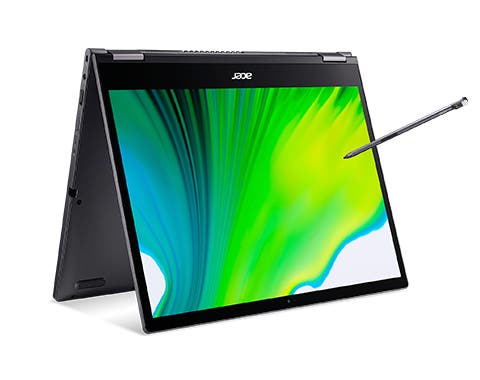 I’m a huge San Diego Padres fan. So when my team advanced to the National League Division Series to play the Los Angeles Dodgers this past week, I planned to watch every inning on our big-screen TV. Unfortunately, when Game 3 came around last night, that screen was spoken for by my wife. So instead of watching on one of our other two TVs with much smaller displays, I got into bed and flipped on the Acer Spin 5 convertible laptop (model SP513-54N-74V2) I’ve been testing. Brought up the game, flipped the laptop into tent mode, and quickly became awed.

That’s because the image looked crystal high-definition clear. In fact, I think the viewing experience may have been superior to that on our big screen. What’s not to like about this Windows 10 machine…you know, other than the Windows operating system? It weighs just 2.6 pounds, has a gorgeous 13.5-inch 3:2 multi-touch display, long battery life and a generous port selection. Perhaps best of all, it’s Acer’s first Athena-certified convertible notebook. Project Athena is Intel’s latest specification for thin-and-light laptops that pretty much guarantees outstanding mobile performance. In this case, battery life lasts up to 15 hours. While I haven’t officially run a battery benchmark test, I can tell you it lasts a long time. And that’s with the machine at full brightness, which with my bad eyes I prefer. And everything is just lightning fast. I seriously have not used a Windows machine ever that was this fast — bringing up apps, loading web pages, streaming video, Zoom conferencing, jumping tabs. There’s no hesitation whatsoever. I could even blare audio without any distortion. The 1.30 GHz processor is a 10th Gen Intel Core i7-1065G7, and the machine has 16GB LPDDR4 of onboard memory plus a 512GB NVMe solid state drive. There are two USB-C ports supporting USB 3.1 Gen 2 (up to 10 Gbps), DisplayPort over USB-C, Thunderbolt 3, USB Charging, DC-in, HDMI port, and a microSD slot. It also includes integrated fingerprint readers, a backlit keyboard, and the potentially zippy Wifi 6 AX 201.

The machine also neatly houses an active stylus on its right side that’s very responsive. I used it with several programs and found no lag. In fact I used it in the Windows search bar on the main window and it easily translated my handwriting instantly and accurately into text. I found myself several times using the stylus as my finger, so I could touch the screen without smudging it.

As I alluded to above, I generally don’t like using the Windows operating system for several reasons — led by its continuous software updates, active need for security software, incessant notifications (which I know I can turn off, but still…), and general bugginess. Don’t even get me started. But if I was ever going to choose a Windows machine to work on daily, I would veer directly to this $1,100 model. Its form factor is sleek. Plus, its performance is simply outstanding — unlike my Padres in the playoffs last night.