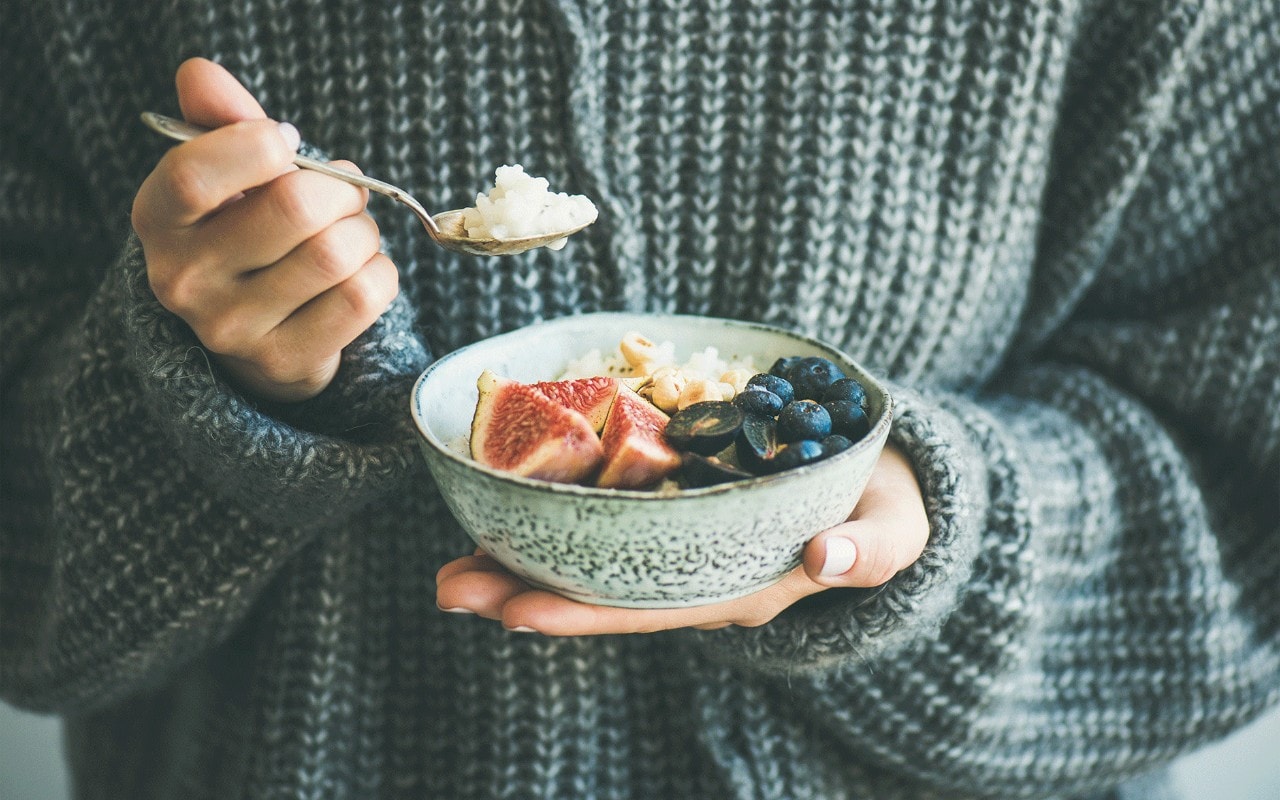 Quaker oats are the ideal base for any number of perfect puddings and sweet treats. Try these wickedly simple recipes that are wonderfully warming at any time of day

Comforting, creamy oats can be eaten at any time of day and are particularly perfect for puddings – or just a sweet treat whenever you need it.

Try these five easy-to-follow recipes made using seasonal fruits plus sweet and crunchy stuff from your kitchen cupboard. They’re guaranteed to warm you up on chilly days (hot water bottle and fluffy slippers optional).

First, make some stewed rhubarb. Wash around 4-5 large stalks (or 8 small), trim off the ends and cut into 1in pieces. Throw into a saucepan with the zest and juice of an orange and 100g caster sugar. Bring to the boil and simmer for 5-10 mins, so the rhubarb has softened but not fallen apart.

To make a crumble topping, mix around 100g Quaker oats with 30g golden caster sugar and a pinch of cinnamon, add 75g of butter (melted) and stir.

This makes enough to top 4-5 portions of cooked porridge: spoon over the stewed fruit and scatter over the crumble mix.

You can use other fruit, such as plums or apples, too. The beauty of this is that you can stew fruit ahead of time, portion it into tubs or bags and either keep in the fridge or freeze, ready to defrost before use.

For two portions of porridge, peel, halve and core 1 pear. Melt 1 tbsp of butter in a frying pan over a medium-high heat, add pear halves cut side down and cook for a few minutes, until browned. Reduce heat and continue to cook for a further 5 minutes, using a dessertspoon to baste the fruit.

Add 1 tbsp soft brown sugar and a splash of water, mixing in the pan. Turn the pear halves over and cook for a couple of minutes until the sauce is thick and sticky.

Allow to cool slightly while you make your porridge, adding a pinch of cinnamon while cooking. Slice the pears and place on top of the porridge, drizzling over the caramel from the pan and scattering over 1-2 tbsps walnuts.

Try this deceptively simple recipe for a decadent dessert.

Make your porridge as usual and ladle out into heat-proof bowls or ramekins, if you’re feeling fancy. Sprinkle around 1 tbsp of golden caster sugar (less if you’re using a smaller bowl) over each portion, taking care to completely cover the oats.

Caramelise the top using a small blowtorch (carefully) or put under the grill, on high, for a few minutes until the top is golden and glassy. Tap with a spoon and dig in.

Think of baked porridge as an oaty version of traditional rice pud – the type that has a beautiful brown crust on top, just like your grandmother (probably) used to make.

Grease a medium (around 8in/20cm square) baking dish and scatter in a couple of generous handfuls of mixed berries. Top with the oats and pour over the milk mixture, then bake at 180°C (160°C fan/gas mark 4) for around 45 minutes, until bubbling and golden.

You could make this as a pudding, as a sharing dish for brunch or just for yourself, whipping up a portion in a smaller dish or ramekin. Warming and oh-so comforting.

Use shop-bought pumpkin purée or make your own by steaming cubed pumpkin for 10-15 mins until soft, then mashing or blending. You can keep this in the fridge or freeze in tubs or bags.

Toast pecans (around 1 tbsp per portion) in a frying pan over a medium heat for 3-5 mins, until nicely browned. Set aside while you make your porridge.

Once ready, remove the oats from the heat and stir in a pinch of cinnamon, 1 tsp maple or date syrup and 1 tbsp of pumpkin butter. Top with 1 tbsp of pumpkin purée (warm through on the stove or microwave it you prefer it hot) and the pecans, plus an extra drizzle of syrup.

To help you get more inventive in the kitchen, Telegraph Spark has partnered with Quaker Oats and a team of expert foodies to create deliciously different oat-based recipes, from daring and decadent porridge twists to brilliant bakes and gourmet takes so you can impress and indulge.